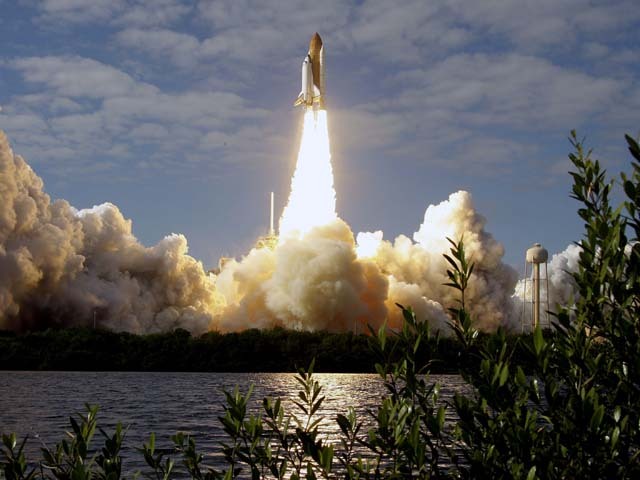 (CBS) Since its first launch in 1985, Atlantis has accomplished quite a lot in its lifetime. The shuttle has carried more than a dozen satellites into orbit, been a launching point for probes to Venus and Jupiter, and helped build the International Space Station. But as we watch Atlantis' last voyage I think it's appropriate to look back at one other notable moment in this shuttle's history: when Atlantis carried into orbit a special payload for CBS News.

In 2009 I was a summer intern at CBS News in New York. One day I asked correspondent Steve Hartman if he would ever consider bringing back his popular 'Everybody Has a Story' series where he would toss a dart at a map of the United States, travel to wherever it landed with CBS cameraman Les Rose, and randomly pick a person and a story out of the town's phone book.

Steve said sure, he'd consider bringing back the series. Then he laid out the idea that had been floating around in his head for nine years: the series would go global, NASA would launch a globe into space and astronauts would spin it, pointing to the countries he would visit. But fear of NASA rejecting his idea had kept the plan grounded.

"You should do it," I told him after hearing his idea.

"Okay," he said to me, "why don't you give them a call and ask them if they wouldn't mind doing that for us?"

And so I took on perhaps the most daunting task ever assigned to an intern: convince NASA to launch something of ours into space.

I grabbed some CBS letterhead and typed up a letter to NASA headquarters outlining our proposition. I tossed in a DVD with a sampling of Steve's stories and popped the envelope in the mail. A week went by.

I was back in Florida for school and had almost forgotten about the whole idea when I received a phone call one afternoon from NASA headquarters in Washington, D.C. They got the letter, liked the idea, and wanted to talk about it.

After a series of meetings, NASA officials decided to try to get the globe on the next scheduled shuttle flight, STS-129, being flown by Atlantis. Former CBS News producer Melissa Smith ordered a few plastic, inflatable globes online and had them rushed to NASA to be tested for space-worthiness.

Finally on November 16, four months after we first pitched the idea to NASA, Atlantis blasted off from launch pad 39A at the Kennedy Space Center with our inflatable globe on board. Steve, cameraman Bob Caccamise, and I watched from three miles away as the 'Everybody in the World Has a Story' project launched with a crackling roar.

Two days later and about 200 miles above Earth, Atlantis docked with the International Space Station and our globe was delivered into the hands of station commander Jeff Williams. A few weeks later (after NASA took care of more pressing tasks), commander Williams videotaped himself spinning and pointing to different countries on the globe, sending Steve and Bob on an around-the-world adventure to prove that everybody has a story.

So as Atlantis carries out its final, historic mission, I'll be thinking about when that spacecraft took this network to new heights.