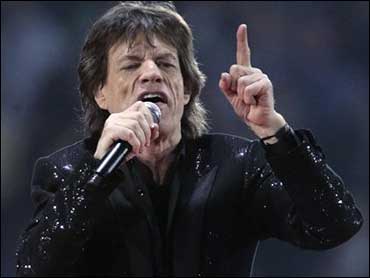 Maybe they're still seeking satisfaction. But time is definitely on their side.

The Rolling Stones are still one of the world's biggest rock and roll bands. They've got the record-setting concert grosses and Super Bowl performance credit to prove it.

Sure, the band's been around since 1962, and three of its members are in their 60s. But all the jokes about walkers and dentures are getting a bit, well, old. Here are a few post-Super Bowl stats on Mick Jagger for you, courtesy of the British tabloid the Daily Express:

What's all the more remarkable is that the Stones are not only the longest-running rock group in America but also its some of its most infamous bad boys. Along with some great albums, their legacy includes a long trail of dead or burned-out band members, wives, and groupies who just couldn't keep up with their rock-and-roll lifestyle.

How does Sir Mick stay in such amazing shape? How does Keith Richards even stay alive -- and doesn't that contradict everything we've been told about how to stay healthy in our senior years? Why haven't the Stones retired to an island somewhere? And what keeps the fans coming out in droves, year after year, to a band that's past its prime?

The answers, it appears, tell us a lot about the changing (but puffy-lipped) face of aging today. To their legions of baby boomer fans, the Stones symbolize their own potential in their later years -- and the possibility of redemption for youthful indiscretions.

"People are being told you can't teach an old dog new tricks, you're over the hill, it's time to lower your expectations of yourself," says Gene Cohen, MD, PhD, a leading aging researcher and author of The Mature Mind. "Now increasingly we're seeing people who still keep their expectations high. It pumps a lot of people up to see that the Stones can still do it."

How Mick Starts It Up

One of the benefits of being in a famous rock band is you can keep a personal trainer on hand as you tour. Jagger's trainer is Torje Eike, a Norwegian whose previous clients include Olympic athletes, national soccer teams, and former Spice Girl Geri Halliwell.

Before a tour, Jagger runs eight miles a day, swims, kickboxes, and works out every other day in the gym, according to a report in the Daily Express. Meanwhile, Eike keeps Jagger on a diet low in fat and high in whole grains. (During the tour, the Stones entourage includes more trainers, dietitians, masseurs, and a physiotherapist, the Daily Express reports.)

Jagger told the Daily Express he reformed himself about 15 years ago and has given up almost all alcohol. But for the other Stones -- the ones who aren't constantly sprinting across the stage -- it's a different story.

Guitarist Keith Richards, 62, reportedly kicked his heroin habit in the 1970s, but still smokes and drinks up a storm. Just last year he was voted "rock's biggest hell-raiser" by the VH1 music channel.

Relatively little is known about the condition of the oldest Stone, 64-year-old drummer Charlie Watts. But the youngest, 58-year-old guitarist Ron Woods, is likely closest to the cliff's edge. Just last year he announced that he had just played his first Stones show while sober.

Woods sidelines as a painter; one of his paintings recently sold for over $1 million. His passion for painting -- as well as his desire to stay with the Stones -- has kept him from succumbing to alcohol, according to a report in the British newspaper, the Daily Mail.

"They have an extraordinary talent, and that helps them weather the consequences of their behavior better than the average person," says Paul Mulhausen, MD, a geriatrician at the University of Iowa's medical school.

Why They Still Rock

A generation ago, a man in his mid-60s was an old man. Today, he's part of a group that gerontologists call the "young old." They're the beneficiaries of new lifestyle habits, new advances in health care, and new expectations.

As the Stones were getting huge in the 1960s, The Who were singing, "Hope I die before I get old." Cohen says the generation gap then emerging was really an education gap. The average person over 65 back then had just 8.6 years of education -- no match for college-educated flower children.

Now, the baby boomers who grew up with the Stones and The Who are getting a bit long in the tooth themselves. Better educated than their forebears, they also want to stay active longer. And they're willing to plunk down serious cash to see the Stones for reasons largely unrelated to music. The Stones remind them what it felt like to be young, even as they defy the common wisdom about what will happen when they get old.

In fact, the Stones confirm an emerging consensus that staying active leads to better physical and mental health in later years. "One of the keys to successful aging is to remain engaged," Mulhausen says. "Find something you're passionate about and stay passionate about it. People who do that are happier as they grow older than people who are disengaged. And being a musician really allows one the opportunity to remain engaged through the life span."

Research is emerging that challenging the older brain and body can help ward off degenerative conditions like Alzheimer's disease.

Of course, Mick and his pals are just part of a growing roster of prominent musicians who have stayed active well into their golden years (see Jerry Lee Lewis, Chuck Berry, Paul McCartney, Bob Dylan, Lou Reed, and so on). Most of these guys don't need the money. They stay active because rock and roll keeps them young -- a good lesson for baby boomers, Cohen says.

These Guys Are Role Models?

Perhaps the Stones are indeed role models for the baby boomers. But if so, they're role models of a very strange sort. If these wild men are still going strong, one might ask, what's the point of keeping healthy habits at all?

It's the kind of question that makes experts on aging twitch nervously.

"You can make up for lost time," concedes Mulhausen. "Research suggests that people who engage in unhealthy behaviors who haven't crossed the line and suffered irreversible health consequences can change their future if they stop -- and start to lead healthier lifestyles."

But that doesn't mean the "Strolling Bones," as they've been called, are in the clear. As they get older, Mulhausen says, their bodies' "homeostatic reserve" -- or ability to weather stress -- will continue to decline. Youthful misdeeds tend to reduce the body's homeostatic reserve. So the Stones may be more susceptible to diseases associated with aging, such as diabetes, heart disease or stroke.

And then there's the question of their hearing. Today's top musicians wear custom-made earplugs that dampen noise very effectively. But the Stones were playing long before such protection was available. As a result, they likely are suffering from mild to severe hearing loss, says Gail Whitelaw, PhD, president of the American Academy of Audiology. It's the kind of hearing loss that makes it hard to hear companions in a crowded bar.

Now or later, the Stones may pay a price for their hard living. But if (or when) their past ever does catch up to them, they do have one advantage over many of their hard-living fans.

"If you're going to engage in those activities, make sure you're rich," Mulhausen says. "Because if you're poor, you can't afford the treatments, and the consequences are going to be much more profound."