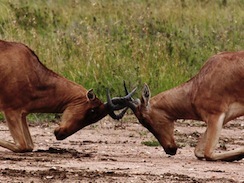 (MoneyWatch) The whole problem with advice on how to deal with boss issues is it's usually black and white. That's because writing without a distinct point of view is usually very boring. In social media terms, that means it's not very "clickable."

Unfortunately, the working world isn't black and white. Not even a little. It's gray. Lots and lots of shades of gray. It's so gray, in fact, that those clickable viewpoints or hard-and-fast rules aren't even right more than half the time. You might just as well take any advice, flip it around and do the opposite, for all it's worth. No kidding.

For example, these days it's popular to say that employees should be able to argue with their boss without fear of sanction. That engaged and empowered workers are effective workers. That people should be free to speak their minds. That managers should be emotionally intelligent, or at least have emotions.

That's all well and good in theory. But in reality, there are also things like organizational structure, management strategy, chains of command, roles and responsibilities, power and authority, and all that. And for whatever reason, most managers and executives take that stuff very seriously. Go figure.

The truth is that the word "should" has limited use in the business world. What managers should do and what they choose to do are often two very different things. Not only that, but all too often, should is in the eye of the beholder. It's subjective. It's gray.

Ironically, I'm guilty of the whole black and white point of view thing myself. I'm fond of saying that, if you go head-to-head with your boss, you'll lose. And even though that's mostly true, it still doesn't mean you shouldn't disagree, argue or constructively confront your boss when the situation calls for it.

After all, every situation is unique. To help you navigate that gray world we affectionately refer to as the workplace, here are 10 rules for arguing with the boss and winning or, with any luck, at least not losing your job:

It's got to be about business. One thing's for sure: The argument had better be about real business, and you'd better be able to show how it ties in to something your boss cares about, like results. If it's about anything else, like how she runs the group or whether the coffee should be from Starbucks or Costco, forget it.

Don't second-guess decisions that are hers to make. When it's your responsibility, your boss should let you make the call. Likewise, when it's her responsibility, you've got to be willing to state your case and then just walk away and abide by her decision.

Be prepared to agree to disagree. The best way to disagree, argue or otherwise challenge your boss is to have no emotional attachment to the subject and, should all your best efforts come to naught, be willing to agree to disagree. Believe it or not, that's when you've got the best chance of actually winning. Bosses don't like it when employees are emotionally attached to things. Don't ask me why.

If you're disillusioned, disorganized, disgusted, or pretty much anything that starts with "dis," don't do it. Let me be really, really clear about this. If you're angry or upset about it, don't argue about it. Go off somewhere, calm down and only then deal with it. That goes double if it's a likely to be a hot-button issue with your boss. Yes, I know that's a double standard. It is what it is.

It better be a high priority. Employees never seem to understand that their hot-button issue may not exactly be first and foremost on their boss's mind. If you know she's got more important things to worry about, then don't go there. Wait until the dust settles. In fact, you'll have a better shot right after the dust settles. Everyone's more agreeable right after they skirt disaster.

Be mindful of his mood. Come on, be logical. Years ago I had these one-on-one meetings with my CEO that never went well. He was always agitated and micromanaging. When we switched from mornings to afternoons, everything went smoother. A lot more decisions went my way. Turns out his mood lightened up after lunch. Maybe he was diabetic. Who knows?

Your principles are not necessarily their principles. Never confuse your principles with something your boss or company should or shouldn't do. No, I'm not saying you should violate your morals or ethics at work. You can express your feelings and then, if it doesn't go your way, you can quit and go work somewhere else or become a whistle-blower if you want. It's a free country. But if you make a big deal out of it, you'll be branded a troublemaker.