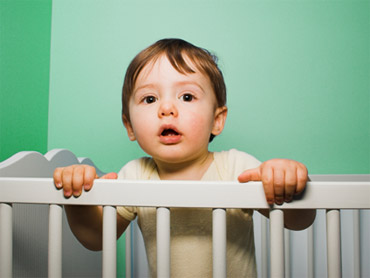 However, there are an average of 64,000 injuries resulting in emergency room visits and 84 deaths involving infants and toddlers annually that are associated with nursery products and dangerous nursery environments, according to the Consumer Product Safety Commission (CPSC).

But what can you do to ensure your baby's safe in the bedroom?

"Early Show" Consumer Correspondent Susan Koeppen showed a few of the products that are potential dangers in a child's room, such as bedding, shelving and windows, and offered tips for keeping those items safe for your baby.

Bad Cribs
• The CPSC has received reports of 93 deaths (about 30 annually) to children under the age of five associated with cribs and mattresses from 2004 through 2006.
• The majority of the crib deaths were suffocation deaths on pillows and folded thick blankets and quilts used as a mattress under the baby, or in an overall crowded crib with pillows and blankets. The majority of the infants were placed to sleep in a prone position. The crib featured on "The Early Show" had mobiles, stuffed animals, and the wrong bumpers. Koeppen said, "This is all wrong."
• There have been a dozen deaths related to drop side and mattress support defects in recalled cribs in 2007.
• Do not borrow or use an old crib in the attic your mom is saving; it may not meet current safety requirements.

Bad Window Coverings
• Blinds - There's one death each month involving all types of window coverings. CPSC has received reports of five deaths and 16 near strangulations in Roman shades since 2006 and three deaths in roll-up blinds since 2001. Strangulations in Roman shades occur when a child places his or her neck between the exposed inner cord and the fabric on the back side of the blind or when a child pulls the cord out and wraps it around his or her neck. Strangulations in roll-up blinds occur when the lifting loop slides off the side of the blind and a child's neck becomes entangled on the free-standing loop or if a child places his or her neck between the lifting loop and the roll-up blind material.

Falling Furniture
• CPSC staff estimates that in 2006, 16,300 children 5 years old and younger were treated in emergency rooms because of injuries associated with television, furniture, and appliance tip-overs. Between 2000 and 2006, CPSC staff received reports of 134 tip-over related deaths. Additionally, CPSC staff is aware of at least 30 media reports of tip-over deaths since January 2007 involving this same age group.

Ways to Avoid Nursery Hazards
• Remove mobiles, stuffed animals and blankets from the crib.
• Check the environment around the crib. Make sure it is not near the window. Keep crib, and anything tall enough to be a climbing threat away from the window.
• Use drapes as window coverings. This is the best option.
• Buy safety straps for furniture, which cost only $5, and can be purchased at the hardware store or a baby store, and are very simple to install.
• Many accidents occur with televisions that are placed on inappropriate stands that are too small or too wobbly. Some are even like a ladder, enticing a child to start climbing it.
• Experts say you should pack your dresser from the bottom up, so it's heavy on the bottom. Don't make it top-heavy. And don't put things on top of your dresser like a TV, stuffed animals or remote controls.