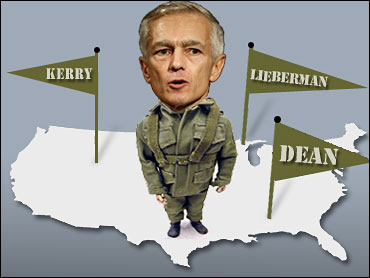 Dotty Lynch is the Senior Political Editor for CBS News.

"Eight career politicians, an officer and a gentleman," was the way Rev Al Sharpton characterized the group of 10 on stage for the third Democratic National Committee debate held at the New York Stock exchange Thursday . He reserved the two places of honor for newcomer retired General Wesley Clark and of course himself, the gentleman.

The eight politicians seemed to defer to the newcomer as well. Or maybe they are just in denial. Clark's entry into the race last week and his zoom in national polls has scrambled the strategic thinking in the Democratic ranks. But the old nine went back to 2003 BC—the Democratic Presidential contest before Clark.

While Clark is the hot story right now, only the reporters on the panel played gotcha — trying to bait him on some of the questions which tripped him up last weekend, especially how he would have voted on the Iraq resolution. But by Thursday he was prepared, first, not to answer hypotheticals; second, to answer the questions he knew something about with confidence; and third, to admit he didn't have specifics yet on proposals like health care and financing the reconstruction of Iraq.

How long the political chatterers, and more importantly the voters, will let him get away with that is an open question. Most voters have yet to check into the race. But in the crucial states of Iowa and New Hampshire, the electorate has been looking over the candidates for months. Clark went to Iowa last week and Des Moines Register's David Yepsen pointed out that Clark is starting very late and has few supporters on the ground, which will be crucial for a victory in a caucus state. Clark flies off to New Hampshire on Friday for his first test there.

The tactical decisions of the candidates in these debates seem to be in a tape warp. In the forums earlier this month when all eyes were on Howard Dean, the others, save Lieberman, left him alone. But this Thursday, John Kerry and Dick Gephardt couldn't wait to hurl their best lines at Dean — on taxes and Medicare. Meanwhile, Dean ducked the opportunity to attack Clark on his political pedigree and chuckled his way past many of the attacks on himself.

The folks who didn't waste time welcoming Clark into the race were the Republicans. Early on Thursday, Speaker Dennis Hastert sent out a press release attacking Clark's economic plan. And during the debate, the GOP sent around documentation of Clark's remarks praising President Bush at the heretofore unheralded Arkansas event.

These comments formed the first question asked by moderator Brian Williams of Clark. "On May 11th of 2001, as reported in US News and World Report, you addressed at the Republican Party Lincoln Day Dinner in Arkansas, expressed your support for the leadership of Ronald Reagan, for that matter, the leadership of our current president, George W. Bush, his immediate staff and Cabinet, and indicated they were needed in place. Did you believe it then? Do you believe it now? "

Clark answered by blasting George Bush and giving a litany of pro-Democratic credentials. "It's been an incredible journey for me and for this country since early 2001. We elected a president we thought was a compassionate conservative. Instead we got neither conservatism or compassion. We got a man who recklessly cut taxes. We got a man who recklessly took us into war with Iraq … I am pro-choice, I am pro-affirmative action, I'm pro-environment, pro-health. I believe the United States should engage with allies. We should be a good player in the international community. And we should use force only as a last resort. That's why I'm proud to be a Democrat."

Behind the scenes, the other campaigns are steering reporters to negative stories on Clark but probably won't start blasting him to his face until the spotlight is on, say John Edwards.

One explanation for this is that the other candidates are playing a local, not national game. The Dean, Gephardt and Kerry campaigns are now focusing on audiences in Iowa and New Hampshire where Clark is just starting to register. The Dean-Gephardt fight for first in Iowa and the Kerry-Dean fight for the winning spot in New Hampshire is fierce. And until they figure our how the "officer" figures in that calculus, they'll continue to focus their attention on the race BC.