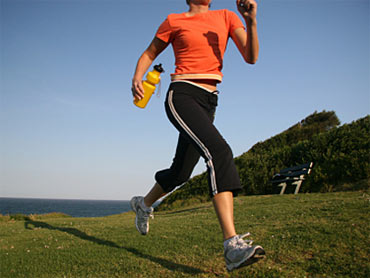 Air pollution can cause exercisers to run slower, breath harder and get middling workout, even negating the positive effect exercise has on your lungs according to a new article in the April issue of Fitness Magazine.

"Usually when you exercise your lung function improves," George Thurston, a professor of environmental health science at NYU School of Medicine told Fitness. "But as ozone levels rose, we saw that benefit shrink to the point where there was no improvement in lung capacity. In short, the benefits of exercising are absolutely diminished by ozone on high-pollution days."

Research shows that when you exercise outdoors, your lungs are taking in car exhaust, soot, construction dust and factory fumes. Breathing in ozone - basically smog - can irritate the throat and respiratory tract as well as inflame the lining of the lungs, and inhaling particulate matter and carbon monoxide is associated with the hardening of the lungs. Air pollution affects a lot of us - according to the American Lung Association, six in 10 Americans live in places where the air poses a health threat.

But even if running or biking isn't your sport, there are other environmental hazards, like untreated sewage in oceans, rivers and lakes as well as pesticides and fertilizer on golf courses. Fitness gives the following tips on how to minimize your exposure:

Golfers should check in and avoid the course 24 hours after a dusting of fertilizer or pesticides. During the game, wear gloves.

Swimmers should check with EPA beach advisories, and skip a swim if an advisory has been issued - or if it has rained heavily in the last 24 hours, when the likelihood of sewage overflow and storm runoff - which could have pesticide residue - is higher.

Joggers, bikers or hikers should sign up for emails from the EPA's about air quality, and on days when air quality is poor, work out early in morning or evening when ozone levels are at their lowest.

For more tips, check out the current issue of Fitness, now on newsstands.