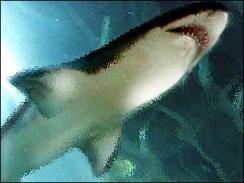 With Memorial Day weekend around the corner, millions of Americans will be heading again to the nation's beaches. They may not say it, but lot of those same swimmers and surfers will be thinking the same thing: Watch out for sharks.

It's a big blue ocean out there - for the most part - but you may have more control over the situation than commonly assumed. Shark experts at the University of Florida say that your best odds for avoiding an attack are likely going to depend on your ability to avoid commonly-known shark hangouts

George Burgess, director of the International Shark Attack File at the university, advises ocean-goers to avoid areas "where there's drop-offs, where there is fishing activity; if there's effluent entry in the water, inlets. Those all are areas of high population density of sharks."

He also counseled against taking dips, either in the early mornings or when the sun sets, the two times of the day where the rate of shark attacks is relatively highest.

"The time period between dusk and dawn, which is a time period when sharks are very active eating, and in particular the biggest and the largest, the bull and the tiger sharks, seem to be doing their most damage," he said.

Meanwhile, the International Shark File has pinpointed patterns between the incidence of shark attacks on humans and moon changes. The highest number of shark attacks often corresponds with the appearance of new moons. Burgess believes that's because the moon may have an influence on sharks' main meal - fish - by influencing their movements and reproductive phases.

Burgess also observes that your best chance of running into a shark is on Sunday in less than 6 feet of water (and during a new moon, naturally.) We may not understand the moon connection fully but the high human-shark incident rate on Sundays is less mysterious: That's the day most people take to the beaches.