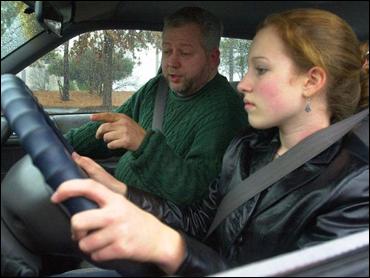 Federal regulators are suggesting that only one passenger under 20-years-old be allowed in cars with teen drivers who have provisional licenses, unless there's someone else in the vehicle who's 21 or older.

Federal safety regulators on Wednesday toughened guidelines for some teen drivers, recommending that only one passenger under the age of 20 be allowed in the car unless an adult driver is supervising.

The National Transportation Safety Board issued new recommendations for graduated driver's licenses, intending to curb highway-related youth fatalities. In 2000, 6.8 percent of drivers were 20 years old or younger, yet they were involved in 14 percent of fatal crashes, according to the NTSB.

The graduated driver's licensing system places a number of restrictions on the driving of teenagers, including limiting late-night driving, restricting the number of passengers in a vehicle and zero-tolerance for alcohol. The board adopted its graduated driver licensing recommendations in 1993.

One of the new recommendations calls for states to restrict young drivers with a provisional license from carrying more than one passenger under the age of 20 until they receive an unrestricted license, or for at least six months. This excludes young drivers who are accompanied by a driver who is at least 21. A provisional license is usually given to a teen who has spent a required amount of hours behind the wheel with a parent or guardian.

The NTSB also asked states to require that an adult driver at least 21 years of age accompany youth drivers during the learner's permit stage.