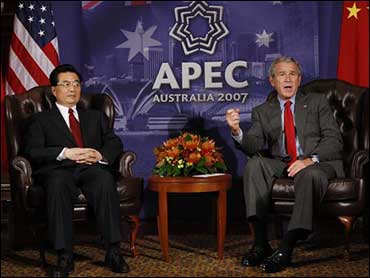 Chinese President Hu Jintao, on the defensive over recalls of tainted toothpaste, pet food and toys, told President Bush on Thursday that Beijing was stepping up product safety inspections.

Hu was the first to bring up the sensitive subject about recent recalls that have stained the "Made in China" label. Mr. Bush expressed America's concern about the safety of imported products, and stressed to Hu that safety concerns did not amount to trade protectionism.

U.S. officials are convinced that China understands growing concerns about faulty toys, toothpaste and other products stamped "made in China," reports CBS News White House correspondent Peter Maer. The talks ran 90 minutes, about half an hour longer than scheduled.

China has acknowledged that some manufacturers have cut corners and used substandard materials, but that the problem involves a relatively small portion of the nation's factories. Hu told President Bush that the government has set up an agency to oversee the quality and safety of exports, and that officials responsible for wrongdoing have been held accountable.

"The president was quite articulate about product safety, and I appreciated his comments," Mr. Bush said after his sit down with Hu on the sidelines of the Asia Pacific Economic Cooperation summit. "He's an easy man to talk to."

"The Chinese side is willing and ready to work together with the international community to step up cooperation in quality inspections and examinations and further deepen mutually beneficial economic cooperation and trade," said Hu, speaking through a translator.

The Chinese leader, who said he had a "friendly" and "candid" chat with President Bush, invited him to the Olympics in Beijing in 2008.

"He accepted the invitation to go to the Olympics, and he stressed that for him, he was going to the Olympics for the sports and not for any political statement," deputy national security adviser Jim Jeffrey told reporters after the meeting.

Behind the handshakes and photo-op, however, lurked contentious issues in U.S.-China relations, including human rights, which are not easily resolved. "I had a chance to share once again with the president my belief in religious freedom and religious liberty," President Bush said.

Hu personifies the international concern the U.S. shares over Beijing's rising clout. If China, already home to 1.3 billion people, continues to grow, its consumer market will be the world's second largest by 2015.

Jeffrey said the two nations were working on setting up a hot line between Washington and Beijing much like one the United States and the then-Soviet Union established during the Cold War.

"Hot lines have had a long history of basically serving as confidence-building measures," Jeffrey said. "I wouldn't say it would relieve tension, because right now we don't have tension in the military sphere. What we do have is, we believe, a developing military that, in order to ensure regional security, should be as transparent as possible."

On climate change, Mr. Bush urged Hu to consider eliminating tariffs on environmental and clean-energy technologies and support an APEC leaders' declaration on climate change. White House advisers say there was no indication that Hu's stance on global warming would prevent China from signing such a declaration.

The climate change issue is at the top of the agenda for President Bush, Howard and the leaders of 19 other Asia-Pacific economies gathered here for their annual summit, held this year in Sydney's Opera House.

They also talked about the Chinese currency. American manufacturers contend the Chinese yuan is undervalued by as much as 40 percent, giving that country a tremendous competitive advantage against U.S. products.

"President Hu indicated that China would continue to reform the currency exchange system and let the market play an increasing role," said Dan Price, deputy national security adviser for international economic affairs. "Both sides acknowledged that currency reform alone will not solve all of our trade problems, but President Bush emphasized the importance for continued steps by China on the currency issue."