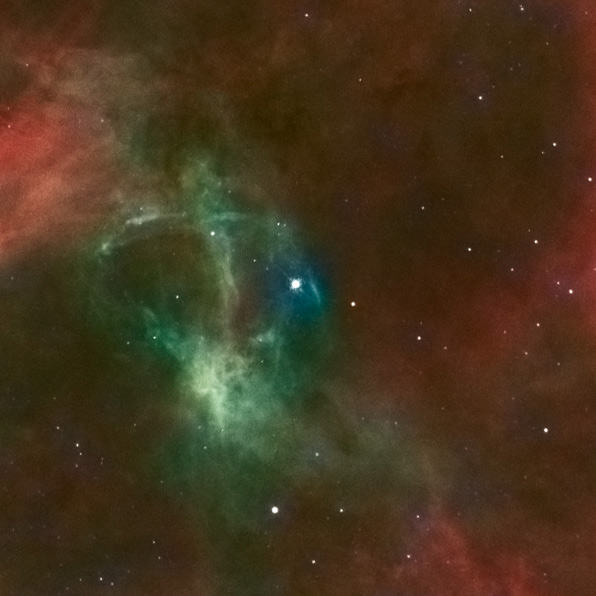 Astronomers have released photos of a massive star that they say was kicked out of its home about 180,000 miles from Earth. The 30 Doradus Nebula, as it is called, is 90 times more massive than the Sun and estimated to be moving at a speed of 400,000 kilometers per hour.

The larger image to the left shows the 30 Doradus star-forming cloud. The inset image was taken by the NASA/ESA Hubble Space Telescope.

For scientists and astronomers, the discovery of this star's errant behavior has become a source of fascination and excitement. NASA believes that the star is relatively young - in space terms - at between one million and two million years old. Here's more from the space agency's report:

"[It] may have traveled about 375 light-years from its suspected home in R136, the bright star cluster marked by a circle. Nestled in the core of 30 Doradus, R136 is one of the most massive young star clusters in nearby galaxies, containing several stars topping 100 solar masses each. 30 Doradus, also called the Tarantula Nebula, resides roughly 170 000 light-years from Earth, in the Large Magellanic Cloud."

NASA describes this as a "runaway," star, exemplifying an extreme case of a very massive star booted by a group of even bigger siblings. These galactic "expulsions" also are known to occur when a star essentially receives a "kick" after the explosion of a supernova.

Nolan Walborn of the Space Telescope Science Institute in Baltimore, said these results had been predicted theoretically "but this is the first direct observation of the process in such a region." "Less massive runaway stars from the much smaller Orion Nebula Cluster were first found over half a century ago, but this is the first potential confirmation of more recent predictions applying to the most massive young clusters," he added.

Food for thought: If 30 Doradus - a star with 90 times the Sun's mass - got flung from its cluster by bigger companions, how large might those stars be?