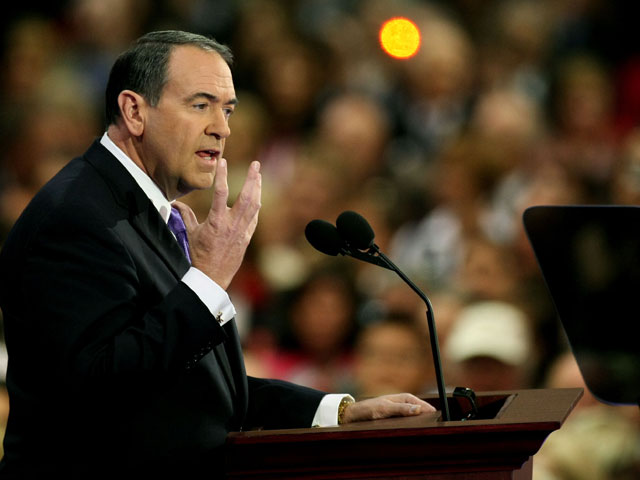 If Sarah Palin jumps into the 2012 Republican presidential primary, "she may run away with it," Mike Huckabee, a possible presidential contender himself, said Sunday. He added, "And that's one of those things everyone needs to be prepared for."

Huckabee made the remarks in Des Moines, Iowa, where he was in town to headline a meeting of evangelical conservatives.

"No question, she will be a very, very strong presence and force, if she gets in," Huckabee said, the Des Moines Register reports.

The 2012 Republican nominating contest remains an open field, and speculation continues to mount that Palin will make a serious run for the presidency. She is scheduled to make two stops in Iowa in the coming weeks to promote her new book, "America by Heart," and the UK's Guardian reports that two of her aides are searching for possible office space in Iowa to occupy in the coming year.

Huckabee, who won the Iowa Republican caucus in 2008, joked Sunday, "If I get in, I prefer she not and that she endorse me."

The former governor of Arkansas also speculated more seriously about starting his own 2012 presidential campaign, the Register reports.

"I'm not on a timetable. I'm not on somebody's calendar to say this is the time when I have to decide," he said. "Am I keeping the option open? Yes. Am I open to it, considering it and giving -- you know -- thought? Of course. I think it would be foolish not to in light of having been through it, understanding what it's about."

Huckabee has kept up his ties to the Iowa Republican Party by contributing to a handful of candidates throughout the state.

At the evangelical event he headlined Sunday, Huckabee lauded Iowa voters for ousting three state Supreme Court justices who agreed with a decision to strike a ban on gay marriage. He called it a "historic move" that could give legs to a national movement.

While both Palin and Huckabee continue to mull their options for jumping back into politics, they remain fixtures of Fox News, where Palin is a paid commentator and Huckabee hosts a weekend program.