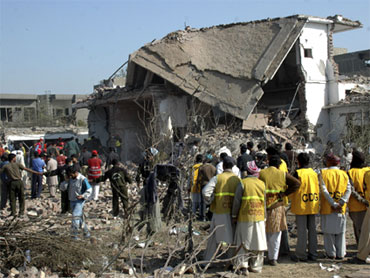 The attack broke what had been a relative lull in violence in Pakistan, where militant groups revile the government for its alliance with the U.S. It also showed that insurgents retain the ability to strike the country's heartland, far from the Afghan border regions where al Qaeda and the Taliban have long thrived, despite army offensives aimed at wiping them out.

No group immediately claimed responsibility, but suspicion fell on the Pakistani Taliban and allied militant groups. Those groups are believed responsible for a wave of attacks that killed more than 600 people starting in October, including several in major Pakistani cities. More recent attacks have been smaller and confined to remote northwest regions near Afghanistan.

The bomb blast Monday comes amid reports of a Pakistani crackdown on Afghan Taliban and al Qaeda operatives using its soil. Among the militants said to have been arrested is the Afghan Taliban's No. 2 commander, Mullah Abdul Ghani Baradar. In recent days, Pakistani officials say an American member of al Qaeda has been captured in the southern city of Karachi.

Most recently, Pakistani officials claimed late Sunday to have arrested a Taliban militant of American nationality in the city of Karachi. Initially, security officials said the man taken into custody was Adam Gadahn, a Californian Muslim convert who has assumed the role of an al Qaeda spokesman in countless propaganda videos. The officials later backed off that claim, saying the suspect was a significant Taliban figure from America, but that his identity was still being verified.

The explosion went off outside a Punjab province police building, police official Zulfikar Hameed said. CBS News' Sami Yousafzai reports the blast caused a crater 10 to 15 feet across, and seriously damaged other buildings nearby.

Police officials in Lahore told Yousafzai that almost a ton of explosives were used in the blast, and a number of people were still believed to be trapped under the rubble of the collapsed building.

"This place was used to interrogate important suspects, but presently there was no such suspect, but more than 40 staff were manning the place," Lahore police chief Pervez Rathore said.

Noorul Huda, a student at a nearby religious school, was in his first class when the blast shook the area, he told TV reporters.

"With the huge bang, blocks and pieces of the roof fell upon us and six of us were wounded," said the young man, who suffered a head injury that was covered by a bloodstained cloth. "It was total chaos outside and people were running and crying for help."

Pakistanis in the neighborhood had filed complaints urging authorities to move the unmarked interrogation facility out of the residential area so the street wouldn't become a target for an attack, said Mohammad Musharraf, who lives nearby.

"My whole house was shaken and I thought it was an earthquake," he said. "A window dislodged and fell on my son, fracturing his arm."

Hospital official Jawed Akram said the dead included at least one woman and a young girl, apparently part of a group heading to a school. Several women were among the wounded.

"People are coming with multiple wounds, many with head injuries and broken limbs," Akram said.

Interior Minister Rehman Malik painted the attack as sign of desperation from militants whose "backs have been broken" by the army.

"They are taking guerrilla actions but gradually it is decreasing and they are being arrested and in the coming days they will have no chance," Malik said.

Much of the police building collapsed, leaving piles of bricks and metal, TV footage showed. Other nearby homes and other buildings, including a mosque, also were damaged.

During the bloody wave of attacks that began in October - coinciding with a major army ground offensive against the Pakistani Taliban in South Waziristan tribal area - Lahore was hit several times.

In mid-October, three groups of gunmen attacked three separate security facilities in the eastern city, a rampage that left 28 dead. Twin suicide bombings at a market in Lahore in December killed nearly 50 people.