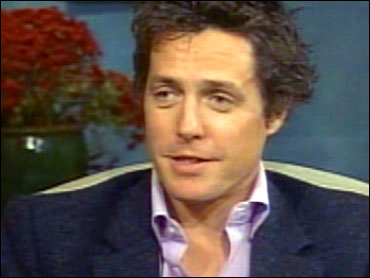 Hugh Grant has a pretty good track record when he works with screenwriter Richard Curtis, who wrote "Four Weddings and a Funeral," "Notting Hill" and "Bridget Jones' Diary."

The winning streak looks likely to continue with the romantic comedy "Love Actually."

In it, Grant plays Britain's new prime minister, who takes a liking to a staff member who has just broken up with her boyfriend.

"I thought it was very funny to dare to be a prime minister who suffers in the throes of love," Grant tells The Early Show co-anchor Hannah Storm. He was, however, not so thrilled to play a likable character.

He says, "It was just that the character of the prime minister himself was so nice and so loveable and I was slightly reluctant to go back to that character, which I played for Richard before."

Recently, he notes, he has played edgier roles and jokingly adds, "I find people like me better, particularly girls, so I was reluctant to go back to that. So he tweaked it a bit and I think he's not too goody two-shoes now.

The film stresses the notion that if you really look, love is all around. Grant explains, "There is a voiceover right at the beginning of the film when you see all of these people arriving at Heathrow airport and greeting each other and kissing, which is real people, and my voiceover says, 'The common wisdom has it that the world is full of hatred and greed. But I don't see it that way. I actually see that love is all around, husbands and wives, and blah, blah.'"

Speaking personally, Grant says, "I think the world is full of hatred and greed." Asked if he believes in love, he says with a smile, "No, but I'll play it for money. I'm an actor for hire. This film does show all aspects of love, including the painful side.

"The funny thing about this film is because it's so positive saying that if you were to stop to think for a moment, or look, love really is all around. People might think that's unfashionable view. But actually, it's incredibly daring to make a film about that, because, just about every other film is about rape and hatred and killing and cutting people's heads off. So I think, in a way, this film is quite cutting edge."

Grant is also working on the sequel to "Bridget Jones' Diary," called "The Edge Of Reason" and says at some point he would love to settle down.

Some Facts About Hugh Grant