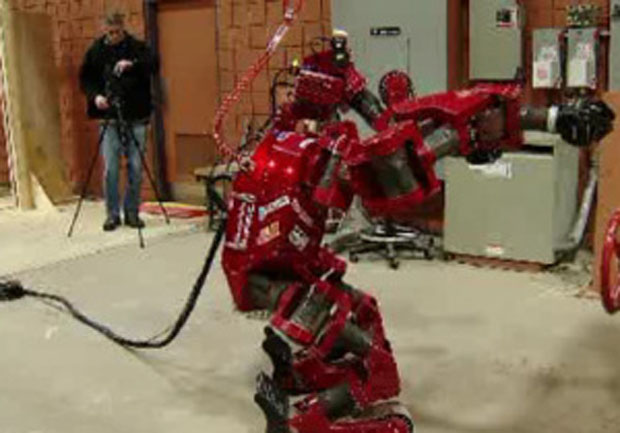 PITTSBURGH -- It looks like science fiction, but it’s reality.

A human-sized robot named CHIMP has been created by Carnegie Mellon’s University’s National Robotics Engineering Center in Lawrenceville, and it’s getting ready for a big challenge, reports CBS affiliate KDKA in Pittsburgh.

At five-foot-two inches, with arms and legs, the robot resembles a person’s frame. Only it weighs 400 pounds and cost more than $3 million to develop.

“When we have an event, and we can’t send in humans because it’s a bad scene, these are the things that can make a difference and keep you out of harm’s way,” said Eric Meyhofer, who’s part of the team working on robot.

Robots like CHIMP for instance, could respond to disasters such as the meltdown of the nuclear plant in Japan after an earthquake and tsunami.

From inside a trailer, a team of people control what CHIMP is doing. They can see the robot’s surroundings through CHIMP’S cameras and laser sensors.

“The robot is kind of like a baby,” said David Stager, who is stationed inside the trailer that reminds you of NASA master control. “So we’re teaching it how to do things faster and faster each day.”

They’re practicing night and day because CHIMP will compete in a contest run by the group that comes up with new technology for the U.S. military.

The DARPA contest will be held in Miami next week. As many as 17 robots will compete at the trials, with the finals being next December.

“CHIMP will need to do eight tasks that would simulate what a person would do in a disaster response scenario,” said Tony Stentz, the director of the National Robotics Engineering Center.

Whether they win or not, Stentz says they will keep working with the technology they developed in building CHIMP.