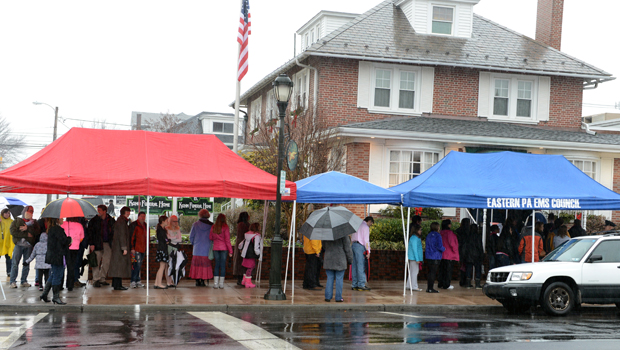 READING, Pa. -- Hundreds of mourners braved cold and rainy weather to honor an 8-year-old eastern Pennsylvania girl serenaded by thousands of Christmas carolers just days before she died of cancer.

In contrast to the drab weather, many of the mourners wore bright pink, orange or green for Delaney Brown's viewing Sunday at the request of her parents, to honor what they called her "fashionista style," The Reading Eagle reported.

"Today's about Laney and it's about the impact she had on a community and the incredible love of her family and her indomitable spirit, and her fight till the end," family spokesman Chris Winters said. "Today's a recognition of what she brought to the world."

Delaney, whose nickname was Laney, died on Christmas morning from a rare form of leukemia.

One of the West Reading second-grader's last wishes had been for a huge holiday singalong. Thousands appeared outside her family's home on Dec. 21 to sing Christmas carols.

Shortly afterward, the family's Facebook page showed a picture of Laney giving two thumbs up with the text: "I can hear you now!!! Love you!"

On Sunday, a line of people holding umbrellas to shield themselves from the rain outside the Kuhn Funeral Home in West Reading stood with heads bowed or stared at posters of Delaney as they waited to write a few kind words to the Browns.

Mitzi Munoz, 40, of Reading, who wore a hoodie emblazoned with hot pink, had tears in her eyes as she talked about the impact of the girl's story on her.

"Laney just touched my heart so much. It's hard to explain," she said. "I don't know if I met her in a store or saw her outside her house one day while she was playing, but she inspired me."

Christi Kuprij-Brown, 45, of Reading, said Laney's story inspired her to get involved in raising cancer awareness.

"Now it's time for me to do something," she said. "This has really made me aware I need to do more in my community."