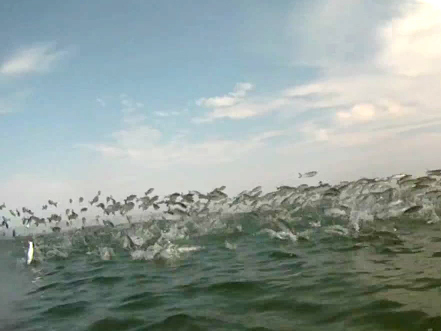 (CBS News) I'm a huge fan of random, bizarre and amazing moments that are caught on tape by pure serendipity.  My favorite in the past few months has definitely been the underwater footage captured of a dolphin pod swimming alongside a boat (and last year would have been the bird phenomena of "murmuration" that was caught on camera).  But the video above definitely makes it to the recent top 5 list of fascinating moments caught by chance.  Watch and see what happens.

The short and striking video of hundreds of fish jumping in and out of the water captured at a very close range was posted by YouTube user PitBenKDH who writes:

This HUGE school of Jumping Mullet raced by me, jumping two feet out of the water! I have never seen so many fish jump in such a large group! At the end, I check the camera and the fish start jumping right into me! It was amazing! So glad I had my GoPro with me!

We were standing on a shallow sandbar, 75 yards offshore, just north of Ocean Bay Beach Access in Kill Devil Hills, NC on the Outer Banks

An awesome phenomena that we're so glad you shared with us and the world, PitBenKDH!