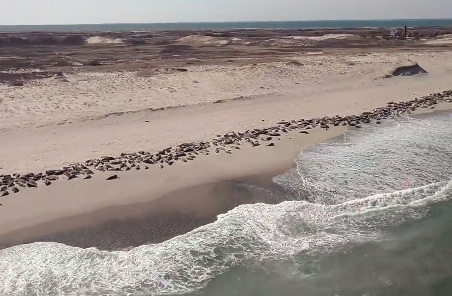 CHATHAM, Mass. -- Have you ever seen so many seals in one place?

Aaron Knight from Norwell, Massachusetts, captured video over the weekend of a seemingly endless line of seals taking over a beach on Monomoy Island off Chatham, CBS Boston reported.

Nearly 300,000 people have viewed the video shot from a plane.

"Miles and miles of continuous blubber," Knight wrote. "It's getting out of control."

He said he's been watching Cape Cod seals from the air for years, but has never seen a display like this.

Experts say the increasing numbers of seals is the result of a 1972 law called the Marine Mammals Protection Act, which made it illegal to hunt the creatures without a permit.

"You're seeing a recolonization, essentially a resurgence of seals. Many of them have come down from Canadian waters and started to pup here," marine biologist Owen Nichols told CBS News correspondent Don Dahler.

With so many seals, this could signal a busy season for Great White sharks on the Cape.