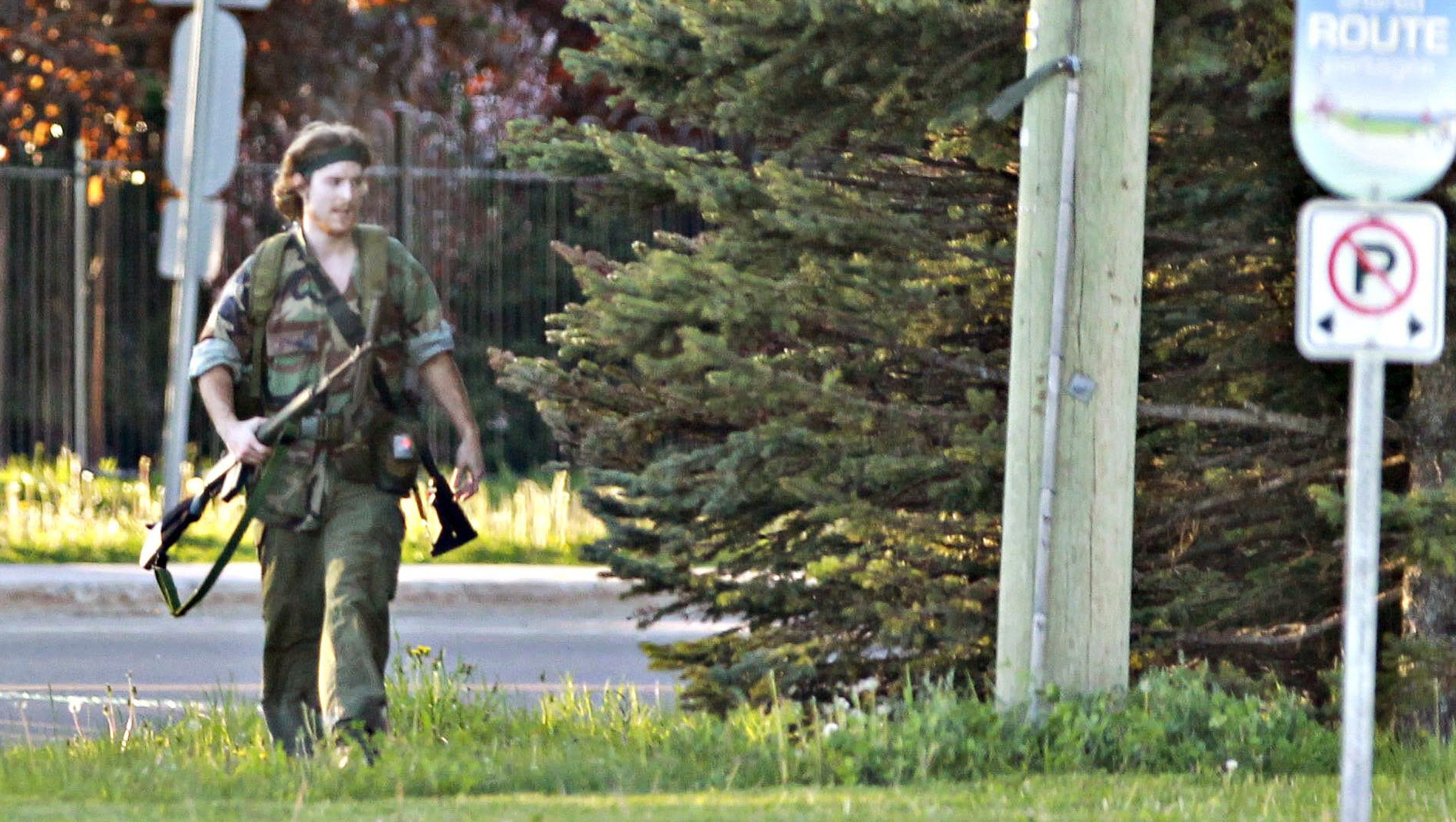 MONCTON, New Brunswick - Royal Canadian Mounted Police combed the streets and woods of this normally tranquil city Thursday in search of a man suspected of killing three officers in the deadliest attack on their ranks in nearly a decade.

The suspect, 24-year-old Justin Bourque, was armed with high-powered long firearms. He was spotted three times while eluding the massive manhunt that emptied roads and kept families hunkered in their homes in Moncton, an east coast city where gun violence is rare.

Dozens of police officers could be seen in a part of the search perimeter with their weapons drawn, some glancing around buildings. Others, including members of a tactical unit, were patrolling streets within the cordoned off area. Armored security trucks were also visible.

"Our search for the suspect is still ongoing," RCMP Cpl. Chantal Farrah told a news conference Thursday afternoon. "Our focus remains in the mountain north area."

Police urged residents to keep their doors locked and to turn on exterior lights to help the search.

"Stay at home, bar your doors and be vigilant," Farrah said. "I know it's hard for families. You are in your house, you are locked, you have your kids, you want to go outside. But the police are saying to stay in."

Police were using air support, tactical teams and canine units, she said. Several hundred officers from New Brunswick and elsewhere from across Canada were involved.

"We have deployed a large amount of resources from here and elsewhere, and we are well-equipped to face this situation," Farrah said.

Bourque was wearing military camouflage and carrying two rifles in a picture released by police on Twitter.

At one point, he was seen coming in and out of a wooded area, Snowman said. "He's capable of moving into the wooded area and out," she said.

Investigators have not determined a motive for the shooting Wednesday evening, in which three officers were killed while responding to a call about an armed man. Two other officers were wounded.

Police did not identify the dead or injured officers.

Canada's Parliament observed a moment of silence and the flag on Parliament Hill flew at half-mast.

It was the deadliest attack on the Royal Canadian Mounted Police since four officers were killed by a gunman on a farm in the western Canadian province of Alberta in 2005. That attack remains the deadliest on Canadian police officers in 120 years.

Snowman said Bourque was not known to police.

Schools and government offices were closed, and the city pulled its buses off the roads. Mail delivery was suspended.

Commanding Officer Roger Brown said the two wounded officers underwent surgery for non-life-threatening injuries Thursday and he met with their families. One was later released from hospital.

"The RCMP family is hurting. As is Moncton, New Brunswick and our country," Brown said.

The homicides were the first this year in this city of 69,000 people about 180 miles east of the Maine border. RCMP Constable Damien Theriault said Moncton had no homicides last year.

Police released a map of a large portion of the northwest section of the city, including a heavily wooded area, where they wanted people to remain indoors with their doors locked. Families hunkered down in their basements.

One of the vehicles, a marked police cruiser, was surrounded by shattered glass. The other, an unmarked SUV with its lights on and the driver's side door left ajar, had several bullet holes through its front windshield.

"I walked over and I saw two feet, facing the street, toes up," said St. Louis, 51. "I realized, 'Oh my God. There's somebody down.' As I got close, I realized it was an officer and this is not a good situation."

St. Louis said he didn't know what to make of the tragedy.

"Our quiet little city, what is going on here?" he said. "How is this happening to us? It always happens to somebody else."

Tim Holt said he and his daughter had been locked down in their home for hours. Holt's wife worked late Wednesday and wasn't allowed to join her family.

"I've just been locked in with my baby girl," Holt said by telephone as his 1-year-old daughter Leigha babbled in the background.

"I've got the radio and the news channel on. ... I've been going from the backyard window to the front door and back to the backyard. It's kind of ridiculous, but it's all I can do."

A few blocks away, Conrad Gagnon, 53, said he was playing a video game in his living room when he spotted a man through a window.

"It was like he was meditating on something and talking ... like somebody on drugs and living in his own world," he said. "He was talking to himself. I saw his lips moving."

Christian Duquette, a neighbor of Bourque's, said the suspect attracted little attention in the small Moncton trailer park where he lived.

"He was a loner. He was never out in the park socializing. Aside from that, he was just your average Joe in a trailer park," Duquette said.

Duquette, 37, said he last saw the young man about a week ago in the drab white trailer on Pioneer Avenue, where he lived with at least one roommate. The street is adjacent to a suburb where police say Bourque confronted them Wednesday at about 7:30 p.m. and opened fire.

Other residents said they had seen Bourque walking up the middle of Pioneer Avenue just before that, armed with at least one gun and in camouflage clothing.

Such violence is rare in Canada, particularly on the east coast.

The three officers were the first Canadian police killed in the line of duty since March 2013, when a police officer in northern Quebec was shot after responding to a domestic violence call.

According to the Royal Canadian Mounted Police website, the last officer to die from a gunshot wound was on Nov. 5, 2007.

In 1974, two Moncton officers were kidnapped, shot and killed after making a traffic stop.