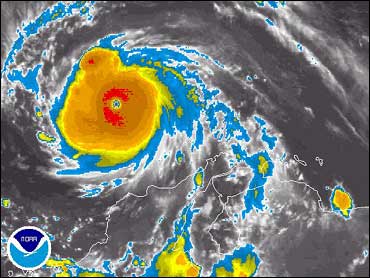 Hurricane Felix strengthened into a dangerous Category 5 storm Sunday and churned its way into the open waters of the Caribbean Sea after toppling trees and flooding some homes on a cluster of Dutch islands.

The U.S. National Hurricane Center said Felix was packing maximum sustained winds of 165 mph as it plowed westward toward Central America, where it was expected to skirt Honduras' coastline Tuesday before slamming into Belize on Wednesday as a hurricane capable of massive destruction.

On Sunday, Felix lashed Aruba, Curacao and Bonaire with rains and winds, causing scattered power outages and forcing thousands of tourists to take refuge in hotels.

"Thankfully we didn't get a very bad storm. My dog slept peacefully through the night," said Bonaire medical administrator Siomara Albertus, who waited out the storm in her home with her Labrador Retriever.

The storm forced tens of thousands of tourists and residents on the three islands off Venezuela to remain in their homes and hotels, stocked up with water, flashlights and emergency provisions.

Felix became the second Atlantic hurricane of the season on Saturday evening, following Hurricane Dean, which left at least 20 dead in the Caribbean and carved out a destructive swath that stretched from St. Lucia to Mexico.

On Saturday, Felix brought heavy rains and strong winds to Grenada as a tropical storm, ripping roofs off at least two homes and destroyed a popular concert venue. No injuries were reported and the Grenadian government was still assessing the damage Sunday.

The government of the Cayman Islands issued a tropical storm watch for Grand Cayman, the wealthy British territory's main island. A watch means that tropical storm conditions could begin affecting the island within 36 hours.

Jamaica's government also issued a tropical storm watch. The island was battered by Dean on Aug. 19.

In Belize, residents stocked up on water and food, and nailed boards over their windows to protect against the hurricane's howling winds. Many in low-lying areas sought higher ground.

Things were more calm in Honduras, where authorities were keeping a close eye on the storm but hadn't started evacuations. Along the country's northern coastline, tourists were still lounging by the pool and enjoying the sun.

Rebecca Waddington, a meteorologist at the hurricane center, advised employees of oil platforms in the Gulf of Mexico to monitor Felix's progress and said the storm could reach the area in four to five days.

Along the Pacific coast of Mexico, meanwhile, authorities discontinued storm warnings as Tropical Storm Henriette moved out to sea.

Henriette dumped heavy rain on western Mexico earlier, loosening a giant boulder that smashed into a home in Acapulco, killing an adult and two children and injuring two other people. A teenager and her two brothers were also killed when a landslide slammed into their house in a poor neighborhood of the resort city.

Forecasters put it on a path that would not threaten land until Thursday, when it could hit a remote section of the Baja California peninsula.