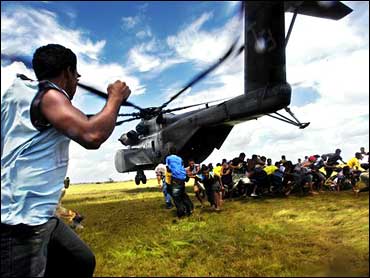 Felix devastated remote jungle beaches and communities along the Miskito coastline when it struck Tuesday as a Category 5 hurricane, destroying crops, erasing homes and killing scores of people.

The U.N. representative in Nicaragua, Alfredo Missair, said Friday that more than 100,000 Nicaraguans were directly affected by the storm and the country will need $43.5 million in aid over the next six months.

Residents of the Miskito Indian community of Krukira need things ranging from "matches, water, hammers and plastic sheeting to chain saws to rebuild our community and our church, because it was all destroyed by the winds," said 64-year-old community member Ofelia Hodgson.

Villager Salomon Chow, 49, lifted his shirt and rubbed his stomach with his hand.

"Look, for three days I have only eaten fallen coconuts," he said.

The Rev. Bernardo Romero said Krukira's 270 families are destitute and need food and water because "the latrines have overflowed and the wells are polluted by dead animals.

Food, medical help, mattresses and other aid is arriving in Nicaragua from the U.S., Venezuela and Cuban governments, as well as nonprofits throughout the Americas, but getting it to remote villages accessible only by helicopter or canoe is a problem.

The storm ruined the bumpy red-dirt tracks that connected the region's larger communities, complicating relief efforts. The only highway from the capital of Managua to Puerto Cabezas is unusable because Felix's rains damaged the bridge over the Wawa river.

These communities are used to fending for themselves, but Felix wiped out their crops and wrecked their boats.

But there are only six Nicaraguan army helicopters and two U.S. Chinook helicopters currently being used to reached remote locations ravaged by Felix.

"There are areas that nobody has been able to reach, not even in canoes. We have a limited number of helicopters, but we are working intensely," said Maj. Sergio Caceres, chief of Nicaragua's Special Operations Unit.

The death toll from Felix has ranged from 49 to more than 100, but no one has been able to tally the missing.

At this point, it is likely no one will ever know how many lives were lost in the Category-5 storm.

The eye of the hurricane passed directly over the Honduran-Nicaraguan coast, devastating seaside villages and island fishing hubs that were home to the Miskitos Indians, descendants of Indians, European settlers and African slaves.

The region is reachable only by plane or canoe in good weather and has a long-standing mistrust of the central government.

Disgruntled villagers came together on beach the region's main town of Puerto Cabezas, which has become the hub of relief efforts and official search missions for any survivors. Others set out on their own to try to find missing loved ones.

Survivors from fishing communities off the coast said Nicaraguan authorities sailed by and sent out evacuation warnings only hours before the eye hit. Many lobster divers were already out at sea by then, and the waves and wind were too strong for their primitive sailboats. Hundreds of others were trapped on tiny distant cayes swallowed whole by the violent storm surge.

The storm hit during the last two weeks of lobster season, the main source of income for most residents. Hundreds of fishermen and lobster divers, many of whom swim deep to the ocean floor simply by holding their breath, were caught at sea in open boats. Many women who work small businesses on the reefs selling food and supplies to the lobstermen were marooned.

Among them was Aurora Prada, a 39-year-old single mother of five, who said the sea was already wild by the time they received word of the fast-approaching hurricane. She piled into a boat with several others and rode out the storm in a swampy, protected area of the cayes. They spent hours bailing out seawater as bodies floated by, and were eventually rescued by a passing boat.

"The government is partly to blame because they warned us really late," she said.