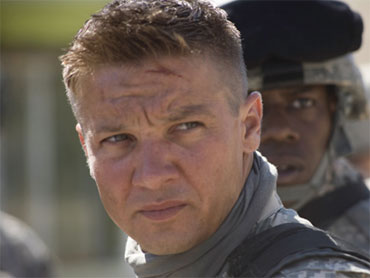 LOS ANGELES - The makers of "The Hurt Locker" are asking a federal judge to take part in a belated Oscar screening of sorts — to watch a DVD of the film and then dismiss an Iraq war veteran's claims it is based on him.

The makers of the Academy Award-winning movie asked the judge on Tuesday to dismiss Master Sgt. Jeffrey Sarver's lawsuit, saying the film is a fictional work. The filings, accompanied by the DVD, contend many of Sarver's claims of similarity are contradicted by watching the movie.

The filings by attorneys for producer Nicolas Chartier and several film companies also maintain "The Hurt Locker" does not violate Sarver's likeness rights because he is not portrayed or named in the film. Summit Entertainment, which acquired the film's rights and released it in June 2009, is supporting the motion.

The motion comes nearly a year after Sarver sued the filmmakers, its screenwriter and director, in March 2010. Days later, "The Hurt Locker" went on to win six Oscars, including for best picture, director and screenplay.

Arguments on the case are scheduled to be heard March 7 — the one-year anniversary of the film's Oscar wins.

An e-mail message sent to Linda George, Sarver's attorney, was not immediately returned.

Sarver deployed to Iraq in 2004 as an explosive ordnance disposal technician tasked with identifying and disposing unexploded munitions and improvised explosive devices, according to his lawsuit. Screenwriter Mark Boal was embedded with Sarver's company in late 2004 and wrote an article, "The Man in the Bomb Suit," for Playboy that revealed numerous details of Sarver's personal life.

The Army bomb expert's lawsuit claims the film's main character, Will James, played in the movie by Jeremy Renner, is really Sarver, who never granted permission for the movie.

Sarver also claims he was source for the phrase "hurt locker," which screenwriter Mark Boal heard Sarver use several times.

Boal has disputed Sarver's allegations and has said the film is a work of fiction.

Tuesday's filings make the same argument and claim the case should be dismissed because it violates California law that seeks to protect people from being sued for free speech, especially on topics of public interest.

"The war in Iraq is, without question, a matter of public interest and a public issue," the filing states.

The motion also claims any characteristics that are shared between Sarver and the film's hero are likely to be found in most other bomb disposal technicians deployed in Iraq.