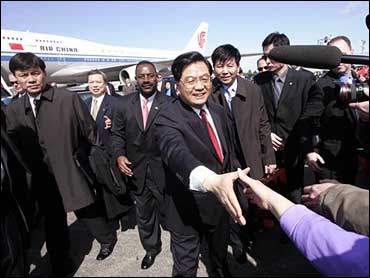 The 21-gun salute China's President Hu Jintao receives on the South Lawn of the White House this week is likely to appear a lot more impressive in Beijing than it will in Washington. The fact that there will be no state dinner honoring Hu will be downplayed, while what the White House calls a "social" lunch with President Bush and the all-important symbolism of the 21-gun salute and reception with full military honors will be front and center as reports of the trip are relayed back to China.

The visit is not quite as important for President Bush, says former National Security Council official and University of Michigan China scholar Ken Lieberthal. "The visit of a Chinese leader is rarely a triumph" for American presidents, Lieberthal said in a telephone interview. For one thing, Mr. Bush is at odds with fellow Republicans on Capitol Hill about how hard to push the Chinese leader on trade issues. Among many topics on the agenda between the two leaders, the lack of human rights and religious freedom in China — which Mr. Bush will raise during their talks — almost always take a back seat to the trade and security-related aspects of the relationship.

The National Security Council's Dennis Wilder told reporters, "There is no autopilot in U.S.-China relations, but relations have matured to a point that neither is this a terribly unusual meeting." For the Chinese leader, says Lieberthal, the visit is "being billed as a trip of tremendous significance, designed to show back home President Hu can handle the U.S. in a constructive way."

Chinese officials have been working hard to set a positive tone, signing some $16 billion worth of contracts with such American companies as Boeing and Microsoft before Hu's arrival in America. Meant to blunt some of the Congressional criticism of the record $200 billion trade deficit the United States has with China, the deals were finalized by other senior Chinese officials in the past few weeks. But the administration and Congress maintain that China is not moving fast enough on enforcing intellectual-property rights and on the valuation of the Chinese yuan against the dollar. Deputy Secretary of State Robert Zoellick referred to the pace of China's policy on a flexible exchange rate as "agonizingly slow."

As important as the economic issues are, however, security issues are every bit as likely to dominate the talks between the two leaders. Specifically, Iran's nuclear weapons program is front and center now because it is currently before the United Nations Security Council. Washington wants China's support for increased pressure on Tehran, while China has so far refused to endorse sanctions. Whether Mr. Bush can convince his visitor that Iran is as big a threat to international peace and security as Washington thinks it is may not be realistic, but perhaps the Chinese leader can be persuaded not to use its veto in the Security Council.

North Korea's nuclear program is another issue both leaders have to worry about. Beijing has been willing to host several rounds of the so-called Six Party talks, aimed at persuading North Korea to abandon its nuclear weapons efforts in return for economic and security guarantees. But the talks are stalled, and officials in Washington would like the Chinese to put more pressure on Pyongyang to get back to the negotiating table. The Chinese may not like to be pressured, but neither party wants the talks to collapse.

Adding to the dynamic, the two presidents meet at a time when the American leader is politically weak. "They're quite aware of it and worried about it," says Lieberthal. "Bush losing political clout on Capitol Hill is not good for China." Moreover, he says, the Chinese, although they may not agree with Mr. Bush's policies on Iraq or Iran, "don't see a weaker Bush as being less bellicose on Iran or North Korea … and don't want to undercut him."

Considering that the two leaders will spend only an hour or so together in a private session, one wonders how any of these issues can go very far beyond the talking points they will make and the staff work already done in preparation for the larger meetings. If anyone is expecting a joint news conference by the two leaders smiling and talking about what a successful meeting they just had, don't bother. Both sides agreed not to have one, with a senior administration official explaining "they're not as comfortable as we are with press events."