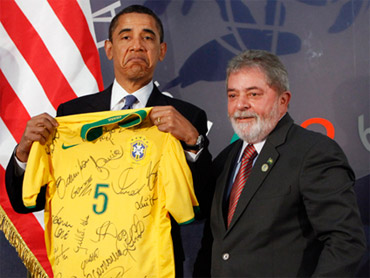 Brazilian President Luiz Inacio Lula da Silva suffered an attack of high blood pressure just before he was to leave for Switzerland and was hospitalized overnight, officials said. He was released early Thursday.

Silva, 64, was in the presidential plane in the northeastern city of Recife preparing to head to the World Economic Forum in Davos when he fell ill late Wednesday and was taken to a hospital, his personal physician said.

The trip to Davos was canceled. It was the first time Silva had been hospitalized since he became president in 2003.

"It was caused by a series of factors ... stress and fatigue," said Silva's doctor Cleber Ferreira. "It was a sporadic episode. The president does not have hypertension and his blood pressure is absolutely normal, it always has been."

Ferreira went on to say that "for a person of his age, his blood pressure is enviable - 110 over 80."

The doctor also told reporters Silva resisted going to the hospital and wanted to continue his 10-hour trip to Switzerland, but he convinced the president he needed to rest.

Silva attended the World Social Forum on Tuesday in Porto Alegre in southern Brazil and had a heavy day of work in Recife on Wednesday. Ferreira said the heat of Brazil's summer and the fact the president recently had a light case of the flu contributed to his exhaustion.

A statement from the presidency said Silva was treated at Hospital Portugues, where he underwent a series of exams - an EKG, chest X-ray, a CT scan and a series of blood tests - none of which indicated anything other than high blood pressure.

The statement also said Silva spent the night in the hospital and rested comfortably before being released just before 7 a.m. (1000 GMT; 4 a.m. EDT). Television images showed a tired but otherwise relaxed-looking Silva hugging doctors. He waved and smiled at onlookers as he left the hospital, but did not speak to reporters.

Silva had been set to receive a new "Global Statesmanship Award" at the World Economic Forum in Davos, Switzerland.

Franklin Martins, Silva's communications minister, said the president was going to relax at home in Sao Bernardo do Campo, just outside Sao Paulo, before returning to work on Monday.