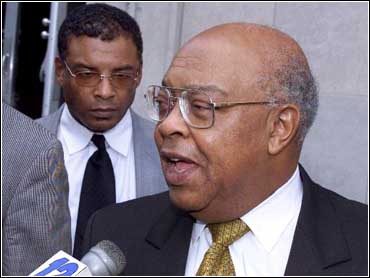 The founder of the International Boxing Federation was acquitted Thursday of charges he took bribes from promoters and managers to manipulate boxers' rankings.

But he was found guilty on six of the 33 felony counts, including tax evasion, money laundering and interstate travel in aid of racketeering.

A federal jury deliberated 15 days before finding Robert W. Lee, 66, innocent on the bribery charges. Lee's 38-year-old son, Robert Jr., who served as an aide, was acquitted on all nine charges against him.

The IBF, as one of world's three major sanctioning bodies for boxing, makes decisions about rankings that play a large role in the purses earned by boxers, their managers and promoters.

Prosecutors accused Lee and other IBF officials of taking $338,000 from promoters and managers virtually since the IBF's inception in 1983 in exchange for favors and rigged rankings.

Lee could get up to 20 years in prison on the money laundering charge, but the actual penalty would be less under sentencing guidelines.

Lee said he will appeal: "My head is bloodied, but it's unbowed. But we'll pick up the staff and keep on marching."

The trial featured damaging testimony from some of the biggest promoters in the sport, including Bob Arum and Cedric Kushner, who contended that routine payoffs were the price of doing business with the East Orange-based IBF.

Boxing's most powerful promoter, Don King, did not appear, but prosecutors called him an unindicted co-conspirator, maintaining he was the prime beneficiary of Lee's manipulations.

Greg Fritz, a spokesman for Don King Productions, has maintained that King's payments to sanctioning groups are all legitimate.

U.S. Attorney Robert J. Cleary said they would pursue the lawsuit to permanently ban the Lees from boxing and recover illegal profits.

Lee's future in the sport is uncertain. The judge in the case last year stripped him of authority in IBF, which later appointed a new president and continues operating under the scrutiny of a court-appointed monitor.

Much of the government's case rested on conversations with Lee that were secretly recorded by C. Douglas Beavers, the longtime chairman of the IBF ratings committee who became a government informant with immunity.

The defense argued that Lee was the victim of a "selective prosecution" of boxing's only black-run sanctioning group, portraying Beavers, who is white, as a racist.

Race did not arise during the deliberations, said three white jurors interviewed outside the courthouse, foreman Gerard A. Brand, Aileen C. Smith and Maurice Glasser.

The two black jurors on the 12-person jury could not immediately be reached for comment.

Cleary denied the defense assertion, calling it an "outrageous allegation."

Still pending is a racketeering lawsuit brought by federal prosecutors against Lee, containing essentially the same charges as thindictment.

No boxers were accused of wrongdoing. Prosecutors did not charge that any fights were fixed, but testimony exposed the tactic of finding a credible, yet beatable, opponent for a vulnerable champion.

Foreman promoter Arum, of Top Rank Inc. in Las Vegas, testified that he used a middleman to get $100,000 to the IBF to sanction the Foreman-Schulz title fight in 1995. An exception was needed because Schulz was unranked, and Foreman was avoiding highly regarded boxers, testimony showed.

When Foreman prevailed in a disputed split decision, Schulz promoter Kushner sought a rematch, an available remedy under IBF rules.

Kushner testified he was surprised when Beavers told him it would cost $100,000, especially since he had been making regular payoffs to the IBF for years to keep in its good graces.

The heavyset promoter, who was called "Fat Man" by Lee and Beavers in secretly taped conversations, said he got the money from Schulz's German-born co-promoter, Wilfrid Sauerland, who confirmed his account.

Even so, the rematch never happened. Foreman relinquished the IBF belt, with witnesses saying he did not want to risk defeat.

While Beavers was on the stand for 22 days, prosecutors played 80 audiotapes and three videotapes for jurors. Two of the videos showed Beavers and Lee passing cash in a Portsmouth, Va., hotel room.

The three jurors interviewed outside the courthouse, however, said they had qualms about Beavers.

"In the end, we determined we couldn't trust Beavers's testimony on its own," Smith said.

On Wednesday, Arum was fined $125,000 by the Nevada Athletic Commission for making the IBF payoff and he cannot attend weigh-ins or enter the ring at fights in the state for six months.

One Nevada commissioner, Dr. Flip Homansky, said Thursday that even though the jury acquitted Lee of bribery charges, it still doesn't change that Arum admitted he paid money to Lee for the fight.

"I don't believe that this verdict will reassure the American public that all is well in boxing," Homansky said.

"It convinces me that we need to look even closer to the practice of ratings in the sport of boxing to make sure that they are done in the boxer's best interest and not in the sanctioning body or the promoter's best interest."