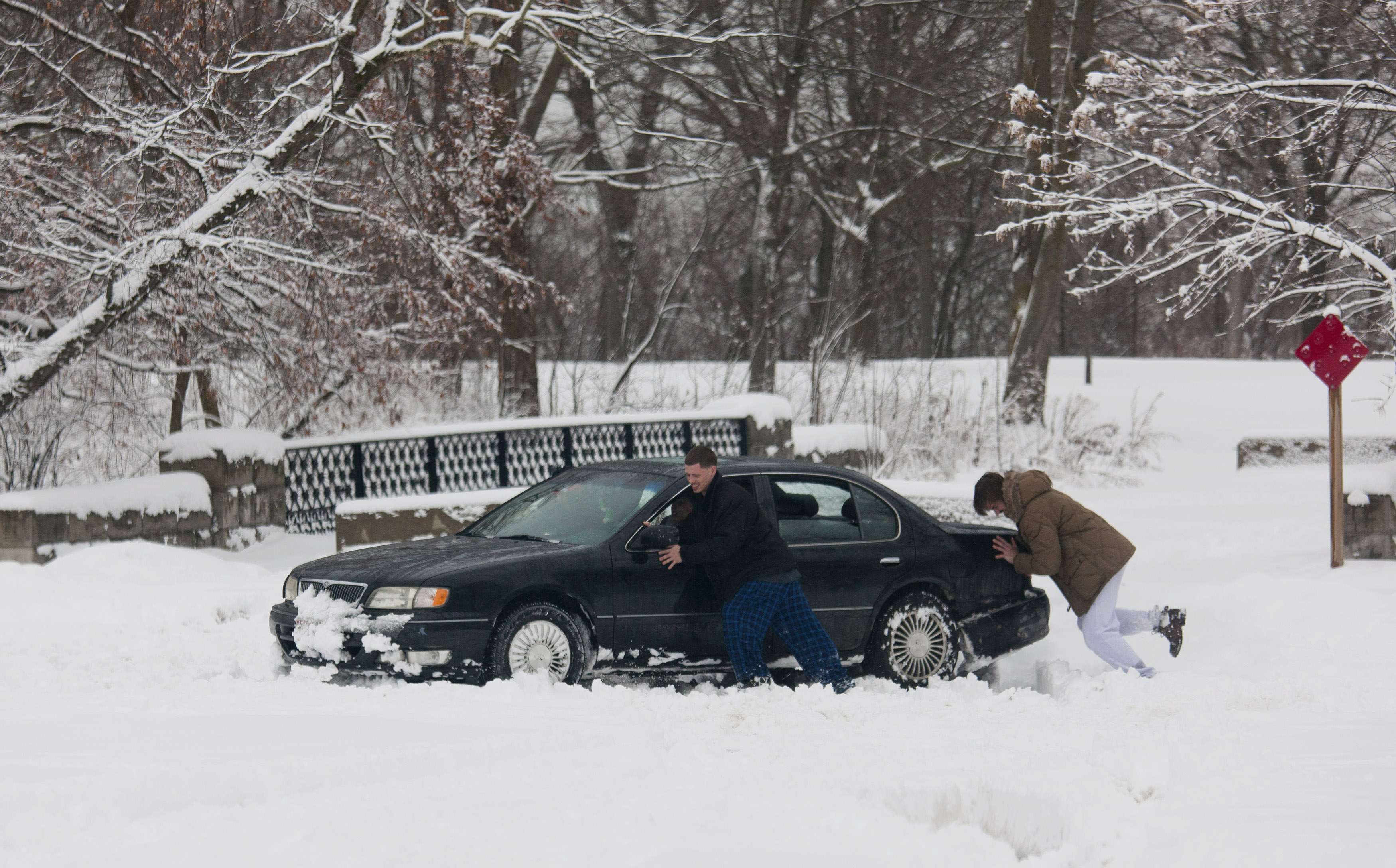 AUGUSTA, Maine - Parts of the country socked by a wild weekend storm will be covered with ice and without power through Christmas and beyond thanks to a steady diet of freezing rain and cold temperatures.

The first full day of winter, Sunday, brought a mix including snow in the Midwest and balmy temperatures along the Mid-Atlantic. Rain and melting snow led to swelling creeks and streams, closed roads and flooded underpasses in Indiana, Ohio and other Great Lakes states.

More than 390,000 homes and businesses were without power Monday in Michigan, upstate New York and northern New England, down from Sunday's peak of more than half a million. Most were in Michigan, whose largest utilities said it'll be days before power is restored because of the difficulty of working around broken lines.

In Maine, the number of customers without power spiked to more than 78,000, and the cold persisted.

"It's certainly not going away," Margaret Curtis, a meteorologist with the National Weather Service in Gray, Maine, said Monday. "In fact, we don't have very many areas where we're expecting temperatures to rise above freezing."

That means untreated roads and sidewalks from the upper Midwest to northern New England will remain a slippery, dangerous mess as people head out for last-minute shopping or holiday travel.

“There are numbers in Montana and North Dakota down to Iowa right now that you wouldn't believe -- wind chill values down 30, 40 below zero. [It’s a] very dangerous cold to be outdoors in,” said meteorologist Eric Fisher of CBS station WBZ in Boston.

With temperatures plummeting to 25 degrees below zero, engine block heaters were on wish lists in North Dakota.

In Maine, Judith Martin was heading from her home in South Grafton, Mass., to Kingston when she stopped at a rest area along Interstate 95 in West Gardiner. She said roads got worse the farther north she drove.

At least 11 deaths in the U.S. were blamed on the storm, including five people killed in flooding in Kentucky and a woman who died after a tornado with winds of 130 mph struck in Arkansas. Another woman died in Arkansas when she lost control of her vehicle on an icy patch of an interstate. A Vermont man died from carbon monoxide poisoning caused by a generator that was running after the storm knocked out power at his house, state police said.

More than 4,000 flights were behind schedule, the majority of those in New York, Washington, Chicago, Denver, Dallas and Houston.

And more than 275 flights were canceled, mostly in Chicago, Denver, Houston and Dallas, aviation data company FlightAware said. The number is in line with a typical travel day and much improved from Sunday's 700 cancellations. There are usually more than 30,000 daily flights in the United States.

Delta Air Lines said a taxiway that may have frozen over was suspected in an accident at Detroit Metropolitan Airport: An Atlanta-bound jetliner slid onto the grass, but no one was hurt.

While the cold will continue to harass people, there's no major precipitation on the horizon through the end of the week, Curtis said.

"It will give people some time to recover from this," she said.

Meanwhile, flooding in Indiana and Ohio, parts of which got 3 to 5 inches of rain over the weekend, caused no reported injuries but forced small-scale evacuations and closed several roads. Flooding in southwestern Pennsylvania damaged about 300 toys a Salvation Army set aside for needy families, but churches and other charities donated replacements.

On Monday, some 25,000 customers were without power in New York's St. Lawrence County, where almost 2 inches of ice fell Sunday, coating tree limbs and power lines.

The winter weather was far from nationwide, though. Record high temperatures were reached in some Mid-Atlantic states this weekend, but forecasts called for drops back to the mid-30s.