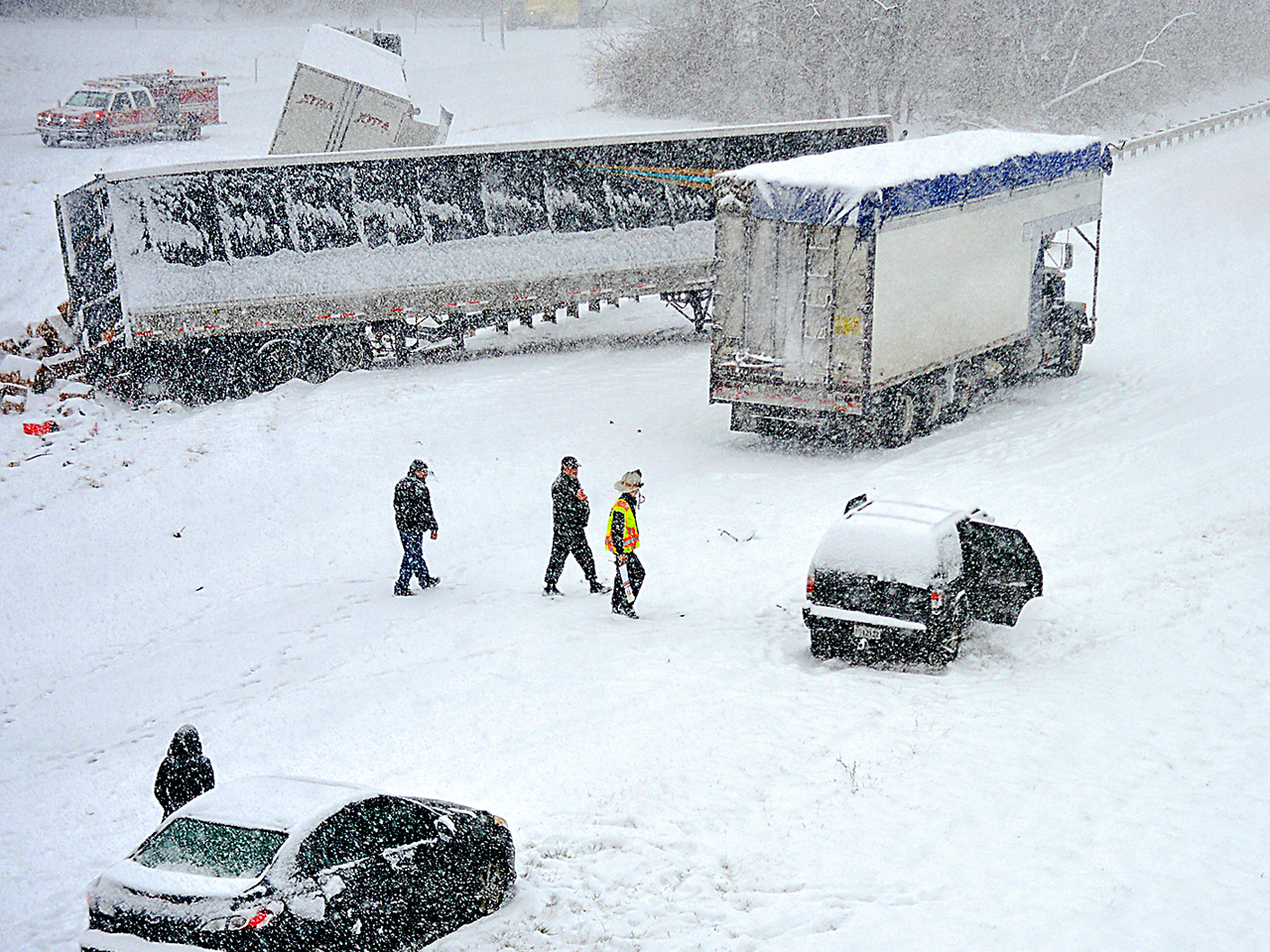 A plodding storm that dumped heavy snow on the unsuspecting Mid-Atlantic region threatened to make roads dicey in the Northeast corridor for Monday's commute, while travel disruptions continued to ripple across the country days after the same system first began wreaking havoc in the skies.

Tens of thousands of customers in the Mid-Atlantic states are without power, with ice-coated trees falling or sagged onto power lines.

Northern Virginia has been was particularly hard-hit. Dominion Virginia Power says 62,000 customers are without power. Spokesman Dan Genest says customers should prepare for outages lasting multiple days because of the second storm.

About 13,000 customers in West Virginia are without power Monday, mostly in southern counties served by Appalachian Power.

And while snow accumulation has been modest overall, forecasters are predicting a second winter storm to hit the Mid-Atlantic region beginning late Monday, which will slow efforts to restore power to those affected by snow and ice on Sunday. Five inches of snow is possible for areas including the District of Columbia, northern Virginia and central Maryland, with the worst expected during Tuesday's morning commute.

The seemingly neverending storm that coated parts of Texas in ice struck with unexpected force on the East Coast, blanketing some spots in a foot of snow and grinding highways to a halt.

Meteorologist Megan Glaros of CBS Station WBBM, told "CBS This Morning" that the wintry mix of snow, freezing rain and below-freezing temperatures -- and the potential for very dangerous, icy roads -- is a concern Monday for parts of New York and Massachusetts, working up through Maine through the course of today.

Glaros said the area with the best potential for ice accumulation is Western Maryland, east and west Virginia and down into central Virginia. "We could see a quarter to a half-inch of ice accumulation," she said.

Indeed, slippery conditions were reported overnight in the New York City area: a crash involving about 20 vehicles closed southbound lanes of Interstate 95 in Greenwich, Conn., for a couple of hours. No serious injuries were immediately reported.

Police say slippery road conditions contributed to a pileup involving about two dozen vehicles in Yonkers, N.Y., late Sunday evening, on the Bronx River Parkway near Desmond Avenue. According to The Journal News, about 30 people suffered minor injuries. A five-car pileup also was reported on the Saw Mill River Parkway in New York, and two minor multiple-car accidents on the parkway near White Plains early Monday.

Heavy snow in the Philadelphia area led to a number of accidents Sunday, including a fatal crash on the Pennsylvania Turnpike that spawned fender-benders involving 50 cars, stranding some motorists for up to seven hours. More than two dozen vehicles were involved in another series of crashes on nearby Interstate 78.

In Maryland, a chain-reaction accident on Interstate 81 in Washington County involving more than 20 vehicles delayed snow removal efforts for hours. The highway was closed for more than three hours after a tractor-trailer ran into the median to avoid cars that had spun out. It was hit by another tractor-trailer that overturned and spilled its load. Several other tractor-trailers ran off the road and jackknifed as their drivers tried to avoid the crash.

The storm canceled more than 2,500 flights Sunday and delayed thousands more, according to estimates from the website Flightaware.com. More than 1,000 of Monday's flights were already canceled, the greatest share from Dallas/Fort Worth International Airport, which was still reeling from the effects of the ice storm that brought North Texas to a standstill.

The forecast for Monday remained up in the air for the Northeast, depending on how quickly the system moves and temperatures rise, according to the National Weather Service.

Forecasters said air travel would likely remain a hassle, too.

"I think the further north you look, departures and arrivals could be affected because of icy issues," Heavener said.

What was forecast in the Philadelphia area to be a tame storm system with about an inch of snow gradually changing over to rain mushroomed into a full-blown snowstorm. Bands of heavy snow made for a wide range of accumulation: a foot was reported in Newark, Del. Philadelphia International Airport received 8.6 inches, more than it had in all of last year.

Philadelphia International Airport spokeswoman Stacey Jackson said a number of passengers were expected to remain in the airport overnight since area hotels had been full for several days. She said staff would hand out pillows and blankets to travelers to make them "feel at home even though they are not."

The nasty weather wasn't limited to the East Coast. Nebraska and Iowa saw snow; multiple weather-related crashes were reported in Wisconsin, including two that were fatal; thousands of customers lost power in Mississippi because of sleet and freezing rain.

Two-thirds of the nation is dealing with bitter cold, from a high of 22 degrees in Chicago to -4 in Fargo, N.D.

A snowstorm that hit along the Utah-Arizona border left hundreds of travelers stranded on Interstate 15 overnight into Sunday. The Arizona Highway Patrol said passengers in about 300 vehicles became stranded after up to 10 inches of snow and slick road conditions prompted the closure of part of the highway. There were no immediate reports of serious injuries.