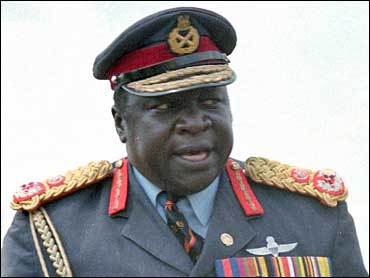 Former Ugandan President Idi Amin, exiled in Saudi Arabia after an eight-year rule marked by breathtaking brutality, was in a coma and in deteriorating condition Monday, a hospital official said.

The hospital official told The Associated Press late Sunday that Amin's condition had stabilized. But Monday morning, the official said, "his condition has deteriorated again." He would not elaborate.

Sunday, three of Amin's sons were at his bedside in the intensive care unit of the King Faisal Specialist Hospital in the Red Sea port city of Jiddah, where Amin and relatives have lived for years. Amin, believed to be 80, was on a respirator. He was admitted to the hospital Friday suffering from high blood pressure, medical staff said.

Amin has been in a coma since his admission.

In Uganda, the independent Sunday Monitor quoted Nalongo Madina Amin — "Amin's favorite wife" — as saying she had approached Ugandan President Yoweri Museveni some time ago and asked that her husband be allowed to return to the east African nation to die but was told that the man who ruled Uganda from 1971 to 1979 would have to "answer for his sins."

In Dar es Salaam, Tanzania, where Museveni was attending a meeting on Burundi, his press assistant, Oonapito Ekonioloit, said Amin was in Saudi Arabia on his own accord and that his relatives "are free to bring him back to Uganda."

"Everyone knows he has a past. If he has any (legal) case to answer, it will be dealt with according to the law," Ekonioloit said. "He's a free citizen. It's a private matter between Amin and his family whether they want to bring him back alive or dead."

Amin, who served in the British colonial King's African Rifles and saw action in World War II in Burma, was a well-regarded officer at the time of Uganda's independence from Britain in 1962. He rose to chief of staff of Uganda's army and air force in 1966.

He clashed with Ugandan leader Milton Obote and ousted him on Jan. 25, 1971, when Obote was attending an African summit.

Amin was hailed a hero and the 250-pound leader was nicknamed Dada, or "Big Daddy." He even was chosen as the head of the Organization of African Unity in 1975 despite some members' objections.

Ugandans initially welcomed Amin, but his popularity plummeted after the East African nation descended into economic chaos and he declared himself president-for-life.

Amin grew increasingly authoritarian, violent and subject to mood swings. It is estimated that more than 200,000 Ugandans were tortured and murdered during his regime, which ended April 11, 1979, when he was ousted by a combined force of Ugandan exiles — including Museveni — and the Tanzanian army.

Human rights groups say as many as 500,000 people were killed during Amin's rule. Bodies were dumped into the Nile River after it became impossible to dig graves fast enough.

At one point, so many bodies were fed to crocodiles that the remains occasionally clogged intake ducts at Uganda's main hydroelectric plant at Jinja.

After his ouster, Amin, a Muslim and member of the small Kakwa tribe from northwestern Uganda, went into exile first in Libya, then Iraq before finally settling in Saudi Arabia on the condition that he stay out of politics.

According to Human Rights Watch, Amin is one of several brutal rulers sheltering outside his native country. Others include: Former Ethiopian leader Mengistu Haile Miriam in Zimbabwe, Haiti's Jean-Claude "Baby Doc" Duvalier who is in France, former Chad president Hissene Habre in Senegal, and one-time Haitian death squad commander Emmanuel Constant in the United States.