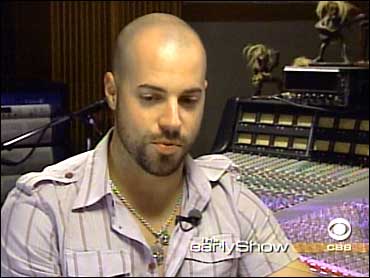 Chris Daughtry didn't win the crown, but the former "American Idol" contestant hopes he will win record buyers with a new rock album set to be released in November.

The expectations are high as Daughtry has been winning over critics on the "American Idol" tour who have said that he is the stand-out performer.

"I'm just having fun out there," he told The Early Show national correspondent Hattie Kauffman. "I love what I do and I use this as an opportunity even though I would much rather be doing my own material. Hey, you don't get to play in front of 20,000 people a night very often so you might as well take advantage of it."

Since appearing on "American Idol" and becoming the front-runner early on, Daughtry said his life has done an about-face.

"You know, I have to check myself every now and then just because it's all going so fast and I'm doing everything I always wanted to do," he said. "I mean, I was working at a car dealership punching a clock, playing a bar here and there on the weekends."

But fame, he said, has a price. Daughtry has a wife and two small children who he does not get to see as often as he would like.

"I feel like I'm going to have to learn how to be a dad and husband all over again once I get home," he said. "Honestly, it's a lot harder than I expected it to be."

When Daughtry was voted off, 16,000 people complained they couldn't get through to vote for him.

"I don't know if it was a block in the phone lines, so many people calling in that night that they just couldn't get through," he said. "It was overload of phone calls. I don't know, but it was definitely a blessing in disguise for me because I don't feel that if I would have won, I would be able to do what I'm wanting to do as an artist, which is, you know, form my own band, write my own music."

On the show, after he performed a song by the band Fuel, the band offered him the job of lead singer. He turned it down.

"If I was still playing in bars and Fuel came to me and said, 'We need you as our singer,' it would have been easy just to say yeah," said Daughtry, who is writing his own songs for his debut album. "You know, I've definitely lived a lot of life this past year and it's given me a lot to write about."