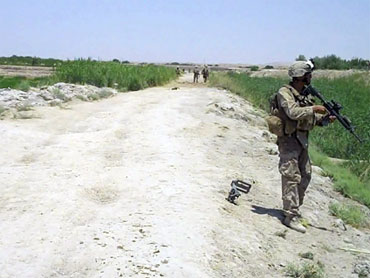 (Left, Two Marines from the Third Battalion, First Marines were killed in an IED attack north of Patrol Base Karma, Afghanistan on Tuesday, May 11, 2010.)

About 10 o'clock last Tuesday morning we heard an explosion to the north of Patrol Base Karma - minutes later we heard there were two Marines down - members of a patrol that had left the base at 6 am.

We went with the Marines that were sent out as a quick reaction force to the scene of the IED.

En route, Staff Sergeant Worley asked for an update on the status of the casualties, and we heard the words "two angels" come across the radio.

Both men were dead.

The Marines used metal detectors to sweep the road as far as the blast scene in case there were other IEDs in place - it took about half an hour to travel the mile and a half. The crater spanned the entire width of the dirt road and was about waist deep - the explosives experts estimated there was about 60 lbs of explosive in the IED.

When we arrived at the site we found an Afghan Army sergeant, Ali Reza Hussein, who was limping - it turned out he had been right behind the two Marines who died.

He said they had just crossed a field to the west and had stepped onto the road. The two Marines who were in front, Sergeant Kenneth May and Corporal Jeffery Johnson, were both carrying metal detectors. They spotted some freshly disturbed earth on the road and went to sweep it - Sgt Ali said he thought it was just camel dung. But as they approached the suspect site, the IED detonated. Both men were killed instantly, Sgt Ali was blown off his feet and hurt his ankle.

The Marines secured the scene, wary of any ambush that the Taliban might have been planning, and recovered the bodies. Both bodies were put in black body bags. Each bag was lifted up by six Marines - three holding each side - and marched slowly away. It was not planned, but it instantly became a very solemn scene, a foreshadowing of the funerals that will be held for both men back in the US. Everybody else stood in complete silence - the only thing one could hear was the crickets chirping in the hot midday sun.

When we finally got back to the patrol base that afternoon, the mood was very glum. Sergeant May and Corporal Johnson were the first Marines from the 3/1 battalion to die on this deployment, and their deaths fell heavily on every man in Weapons Company. It also saddened us - myself and my producer/cameraman Randall Joyce. After spending so much time with the Marines of 3/1 already, and having been so openly welcomed by them to observe their operations in this very difficult part of the country, we also keenly felt their loss. Our deepest condolences go out to the families of the two fallen Marines back in the US.

We left Patrol Base Karma today, having spent 9 days there. As we walked back up the road, we had to stop at the crater while a backhoe was brought in to fill up the hole. Then we walked on, and I noticed that again everyone was silent. There was only the sound of the wind rustling in the reeds beside the road, and a few crickets, chirping again in the heat of the midday sun.