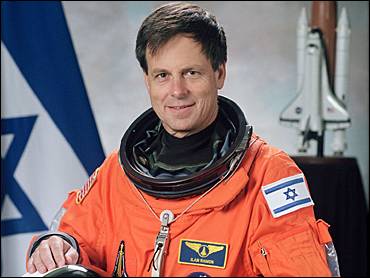 They were joined by schoolchildren across the country, who had followed the first Israeli astronaut's historic trip into space. Now, they were lighting candles in his memory. CBS News Correspondent David Hawkins reports.

"Everybody's very sad in Israel. We thought that this hope would bring us a big smile to the face because the spirit is very difficult for us in Israel," said one Israeli.

The nation's flags are at half-staff. Israel, where sudden death from terror has become despairingly routine, is mourning an altogether different kind of tragedy today.

"Very much the element here [is]of a little town being proud of its hero. But it went beyond that. He brought a sense of optimism of sorts, which we don't have these days," said Ha'aretz newspaper columnist Ari Shavit.

Her husband was very optimistic, Ramon's widow told Israeli reporters Sunday. He didn't even write a will before going into space.

She says her husband died doing what he loved, and that he was with people that he loved. That optimism, the hope that Ilan Ramon carried with him into space, was not shattered on Saturday, observers say.

It remains in the heavens, and in the hearts of those who remember him.