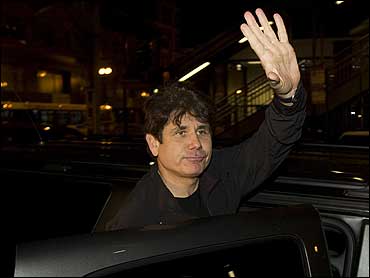 Illinois lawmakers launched an unprecedented impeachment inquiry Tuesday against embattled Gov. Rod Blagojevich, who showed no sign of going down without a fight.

An impeachment panel met briefly and then adjourned until Wednesday, giving Blagojevich time to send a representative to the hearings, which may last into January.

Lawmakers on Monday shelved the idea of setting a special election where voters would fill the vacant Senate seat of President-elect Barack Obama — the seat the governor is accused of trying to sell before his arrest last week on federal corruption charges.

But the House also voted 113-0 to create a bipartisan committee that will recommend whether Blagojevich should be impeached. That 21-member panel met for about an hour Tuesday, with members making speeches about the gravity of the scandal.

Committee chairwoman Rep. Barbara Flynn Currie, D-Chicago, began the meeting by saying the Blagojevich scandal had created a "crisis of confidence" in state government. But she cautioned panel members against moving too fast.

"Let us remember that we're not Alice in Wonderland. We're not the Red Queen. We do not sentence first and then do the verdict," she said.

"Frontier justice will not prevail in this proceeding. A rush to judgment does not serve the people of the state well."

Currie agreed to resume the hearing Wednesday so Blagojevich's Chicago attorney, Ed Genson, could attend. The governor was invited to the hearing but didn't reply personally to the panel, choosing instead to send Genson.

Currie also says she's awaiting a response from U.S. Attorney Patrick Fitzgerald about whether the panel will be allowed to hear testimony from certain witnesses without compromising Fitzgerald's case against Blagojevich. Currie said she has no idea when Fitzgerald will reply.

The House committee will eventually make a recommendation on whether to impeach to the full House, which would then decide whether to file charges against the governor. Then the Senate would hold hearings and ultimately make a ruling.

If the panel recommends impeachment, it would be the state's first such move against a sitting governor.

Blagojevich ignored reporters' questions as he left his Chicago residence before 9 a.m. Tuesday, carrying a briefcase and gym bag.

His legal woes were expected to grow as sentencing for convicted political fundraiser Antoin "Tony" Rezko was postponed indefinitely Tuesday. Court-watchers say the delay will give Rezko more time to talk to prosecutors about Blagojevich or other lawmakers.

Rezko, who raised more than $1 million for Blagojevich's campaign fund, was convicted of shaking down businesses seeking state business for campaign contributions. Witnesses at his trial testified that Blagojevich was aware of some of the incidents.

Also Tuesday, a spokesman for U.S. Rep. Jesse Jackson Jr. confirmed to The Associated Press the congressman has been talking to federal investigators about his dealings with Blagojevich since the summer.

Jackson has acknowledged being the "Senate Candidate 5" referenced in the federal complaint against Blagojevich, but he has denied initiating or authorizing anyone to promise anything Blagojevich on his behalf.

Senate Democrats on Monday dropped any discussion of a special election to fill Obama's Senate seat, for now leaving any decision about it in Blagojevich's hands.

Blagojevich, who has ignored strident calls to resign from Obama and virtually every lawmaker in the state, defiantly signed 11 bills into law Monday — including one mentioned in the 76-page FBI complaint against him. And he hired Genson, a bulldog defense attorney with a history of taking tough cases to trial.

Genson said Blagojevich would not step down. "He hasn't done anything wrong," the attorney said Monday night.

At the Capitol on Monday, House Speaker Michael Madigan — a Chicago Democrat and former co-chairman of Blagojevich's re-election campaign who has become one of the governor's fiercest critics — said the committee's review will include the criminal charges against Blagojevich as well as a long list of other possible wrongdoing during his six years in office: abuse of power, taking action without legal authority, ignoring state laws and defying lawful requests for information from the General Assembly.

The committee may well work through the holidays, but it's not clear how long it will take to produce a recommendation. That depends partly on whether the governor's legal team takes part by questioning witnesses and presenting evidence, which would significantly lengthen the process.

Blagojevich spokesman Lucio Guerrero said he didn't know how Blagojevich will respond to the committee.