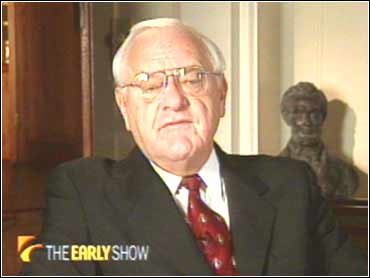 Gov. George Ryan, whose moratorium on executions vaulted him to national prominence while a corruption scandal whittled away his popularity in Illinois, announced Wednesday he will not seek a second term in 2002.

Supporters waved signs and fellow GOP leaders — some of whom had questioned his ability to win re-election, praised the governor's accomplishments at an event that was part campaign-style rally and part political memorial service at the county courthouse in his hometown. Ryan, a former pharmacist who began his political career 33 years ago as a Kankakee County Board member, touted the accomplishments of his first two and a half years in office for more than 20 minutes before announcing his decision.

"The governorship should not become mired in the political divisions of a campaign year," said Ryan, 67, who has held statewide office since being elected lieutenant governor in 1983. "That's why I will not be a candidate for re-election in 2002."

Ryan has been dogged throughout his term by an ongoing federal investigation of a bribes-for-drivers' licenses scandal that began when he was secretary of state.

Although he has not been accused of wrongdoing in the scandal, his popularity has dropped to basement level in statewide polls, and top leaders in his own Republican Party have suggested Ryan would face a difficult battle for re-election.

Republican Attorney General Jim Ryan has scheduled his own announcement Thursday, when he is expected to launch a bid for governor, and Lt. Gov. Corinne Wood also might run.

State Sen. Patrick O'Malley, R-Palos Park, announced in June that he would enter the March 2002 primary for governor whatever George Ryan's decision was.

A half-dozen or so Democrats have been laying the groundwork for the governor's race, sensing a real shot at ending Republicans' 24-year control of the executive mansion.

Ryan did not directly mention the bribes-for-licenses scandal but did confront conservative critics from within his own party who have opposed his policies, including his huge Illinois First public-works program, tax increases, his support of legislation to protect gays from discrimination, and his veto of anti-abortion legislation.

"I can take the heat, but I worry for the Republican Party," he said. "If we're to be successful we need to listen more and shout less."

Above all, he pointed with pride to his death-penalty moratorium.

Ryan vaulted into the national spotlight in January 2000 by halting executions indefinitely after a string of men were released from death row either because evidence showed they were innocent or because they received unfair trials. Since Illinois reinstated capital punishment in 1977, 12 death row inmates have been executed while the sentences of 13 others have been overturned. A Ryan-appointed commission is studying the state's death penalty system.

"During the past three years, I've talked to people all over the world about the shocking conditio of our capital punishment system," Ryan said. "I knew then as I do now that I had no choice but to call a halt to what was obviously a deeply flawed processs."