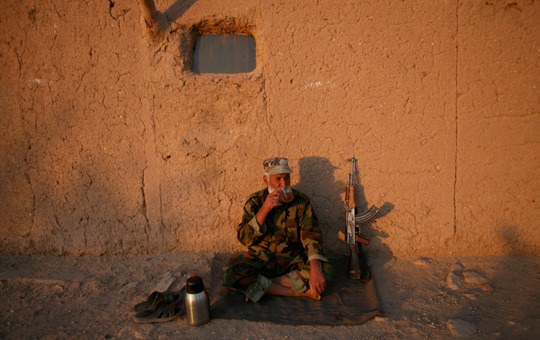 When President Obama laid out his strategy for the war in Afghanistan nearly a year ago, he suggested that while he was deploying 30,000 new troops, the end of the war was not far off.

The troop surge, he said, will "allow us to begin the transfer of our forces out of Afghanistan in July of 2011."

His position - to send more troops while also offering what looked like a deadline for their return - was meant to give the United States an opportunity to stabilize the country while also addressing concerns that America had no exit strategy.

While the July 2011 date made headlines, however, the president was careful to give himself wiggle room.

July 2011 was only, he noted, the beginning of the end - which meant he could bring home just a few thousand troops and still meet the deadline. In addition, Mr. Obama reserved the right to change the deadline depending on conditions on the ground - if things didn't go well, he and other military leaders said, they would reconsider their plan.

And despite some recent successes, things have not gone well. The situation in Afghanistan largely deteriorated in 2010, and an endgame - one that involves the United States and its allies departing a stable Afghanistan with a minimal terror threat and the capacity to handle its own security - is as elusive as ever.

The July 2011 date - the one used to placate an American public that has grown increasingly weary of the war - may still mean the withdrawal of some troops. But it appears likely that it will ultimately be of little importance when it comes to the actual combat operations. (The White House has not officially commented on the report, but it appears to be a strategic leak by officials, who say it will be formally presented at a NATO summit this week.)

Defenders of the July 2011 date say it gave Americans and allied forces, as well as Afghanis, a goal that could help focus their efforts. Detractors say that the date both obscured the reality of America's commitment in Afghanistan and convinced the Taliban that America would soon be gone, complicating efforts to win the war.

Military officials have been laying the groundworkto largely shrug off the July 2011 date for months, stressing the need to wait for a strategic review at the end of this year that could mean a reassessment. Mr. Obama has done so as well, stating in June that "we did not say that starting July 2011 suddenly there would be no troops from the United States or allied countries in Afghanistan." And Vice President Joe Biden - who was quoted telling Jonathan Alter that "In July of 2011 you're going to see a whole lot of people moving out. Bet on it" - was insisting by July that "it could be as few as a couple thousand troops."

Now, as the Times notes, key officials (among them Defense Secretary Robert M. Gates, Secretary of State Hillary Rodham Clinton and Adm. Mike Mullen, the chairman of the Joint Chiefs of Staff) are coalescing around the 2014 date, even as Afghan president Hamid Karzai pushes for a reduced troop presence immediately. (Karzai has also endorsed the 2014 timetable.)

Yet there is no more reason to think of 2014 as the end date for the war than there has been July 2011. Just like the first deadline, it is a goalpost that can simply be moved; an aspiration, not at end.

Even if things go well between now and then - a big if - 2014 would not be the end of the war. The end of "combat operations," as the Iraq war has shown, does not mean the end of American troop deaths - nine Americans have died in Iraq since Mr. Obama hailed the end of combat operations there in September.

That's because if the combat operation does end in 2014, America will most likely still keep "non-combat" troops - who will be combat capable - in the country. (The "non-combat" troops in Iraq are still fighting alongside Iraqis and engaging in "targeted counterterrorism operations.")

The president is in a difficult position when it comes to Afghanistan: He believes it is crucial to American security to ensure that the country is not allowed to stand as a breeding ground for terrorism. At the same time, a majority of Americans oppose the nine-year-old war, making it politically necessary to signal that the end is in sight.

That doesn't mean that the end actually is in sight, however, or that Afghanis will be prepared to take over security operations in four years. With one deadline approaching, the administration is coalescing around another; if they believe it necessary come 2014, they will simply coalesce around a third.

Is that a bad thing? Not if you believe the administration needs to stay in Afghanistan as long as possible to achieve its goals, regardless of domestic pressures. But it's worth remembering that when you're fighting a war, there's really no such thing as a firm deadline.