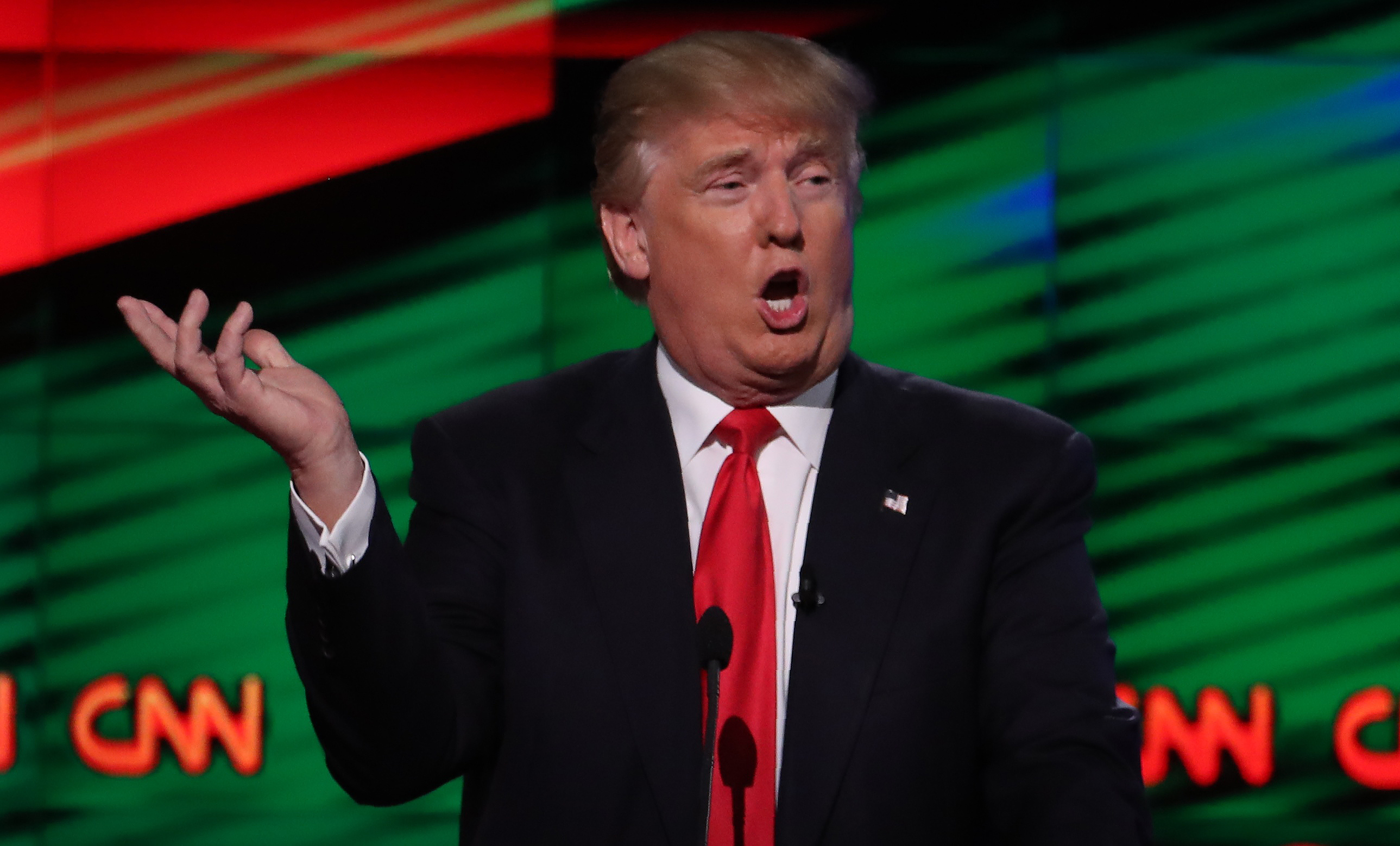 With two major, winner-take-all primaries taking place this Tuesday in Florida and Ohio, Donald Trump could effectively seal his grip on the Republican presidential nomination within a matter of days. Confronted with that reality, all the candidates in Thursday night's GOP debate -- including Trump himself -- put aside the name-calling and the shouting that's overwhelmed just about every Republican debate so far and sobered up for a serious policy debate.

The candidates were still willing to criticize each other -- Marco Rubio and Ted Cruz took Trump to task for his over-simplified approach to policymaking.

"The answer is not simply to yell, 'China bad, Muslims bad,'" Cruz chided the front-runner. "You've got to understand the nature of the threats we're facing and how you deal with them."

While Trump in past debates responded to such lectures by calling his opponents names like "Lyin' Ted" and "Little Marco," he held his tongue this time, seemingly aware the race is now his to lose. Instead, he commended all the candidates on stage, "I cannot believe how civil it's been up here."

However, by forgoing his aggressive debate style, Trump gave his opponents plenty of opportunity to scrutinize the shortcomings of his positions on a range of issues, including Social Security, foreign policy, immigration and his views of Islam. Rubio in particular skillfully used Trump's black-and-white views of the world to highlight his own more substantive positions.

For instance, after Trump defended his recent assertion that "Islam hates us," Rubio managed to attack the front-runner's position while doing his best not to offend voters who may be sympathetic to Trump's views.

"I know that a lot of people find appeal in the things Donald says because he says what people wish they could say," Rubio said. "The problem is, presidents can't just say anything they want. It has consequences, here and around the world."

The senator shared a story of meeting two Christian missionaries whose work in Bangladesh has become more dangerous because of news reports about the election.

"So this is a real impact," he continued. "There's no doubt that radical Islam is a danger in the world. I can also tell you if you go to any national cemetery, especially Arlington, you're going to see crescent moons there. If you go anywhere in the world you're going see American men and women serving us in uniform that are Muslims. And they love America."

On the issue of Social Security, Rubio carefully tried to explain his conservative plan to gradually push back the retirement age to 70 without offending Florida's seniors. "I'm against any changes to Social Security that are bad for my mother," he said.

Trump, meanwhile, insisted, "I will do everything in my power not to cut Social Security" while at the same time chastising Democrats for "doing nothing with Social Security." The front-runner could only explain how his position was different from the Democrats in broad, sweeping statements: " I want to leave Social Security as is, I want to make our country rich again so we can afford it," he said.

The front-runner had a similarly questionable response to the issue of legal immigration, pointing out his own exploitation of the visa program for high-skilled workers.

"I know the H1B very well. And it's something that I frankly use, and I shouldn't be allowed to use it. We shouldn't have it," Trump said. "Very, very bad for workers... Well, I'm a businessman, and I have to do what I have to do. When it's sitting there waiting for you -- but it's very bad... It's very bad for our workers, and it's unfair for our workers. And we should end it."

On this issue, Cruz gave an answer neatly tailored to conservative voters who like Trump's aggressive approach to immigration but may be searching for an alternative candidate.

"We need to redefine our legal immigration system so that it meets the needs of the American economy," Cruz said. "Right now, we're bringing in far too many low-skilled workers. What that is doing is driving down the wages of hard-working Americans. Our system isn't working. And then on top of that, we've got a system that's allowing in millions of people to be here illegally... We're going to build a wall, triple the border patrol. We're going to end sanctuary cities."

Trump also opened himself up for criticism on the issue of relations with Cuba. He declared he's "somewhere in the middle" between the Obama administration and conservatives on the matter. Asked repeatedly by the CNN moderators to elaborate, Trump gave vague responses such as, "I want to do something, but it's got to be done intelligently." He added, "We have to make a good deal and we have to get rid of all the litigation that's going to happen," speculating that Cuba could try to sue the U.S.

Rubio launched into Trump, "I don't know where Cuba is going to sue, but if they sue us in a court in Miami, they're going to lose." He won the loudest applause of the night with that retort and his own explanation of a "good deal" in Cuba: "Here's a good deal -- Cuba has free elections, Cuba stops putting people in jail for speaking out, Cuba has freedom of the press," he said. "And you know what? Then we can have a relationship with Cuba. That's a good deal."

While the more serious tone of the debate didn't help Trump, it also worked against Ohio Gov. John Kasich -- the one candidate who has worked the hardest to run a positive, policy-based campaign. As the biggest underdog currently in the race, Kasich has stood out in prior debates for his focus on the issues. While that approach didn't set him apart on Thursday night in Miami, his performance may have been strong and consistent enough for the governor to win his home state of Ohio on Tuesday. While Trump is polling strong in Ohio, one Fox News poll this week did show the governor in the lead.

Rubio, meanwhile, is still trailing Trump in the polls of his home state of Florida but may be able to rally enough support there by Tuesday. He struck a note of optimism on Thursday night about the future of America, returning to the positive message with which he entered the race -- a note of optimism that could be applied to his flagging campaign.

"Being here in Miami is special," Rubio said, playing to the home crowd. "My grandfather lived with us most of his life while I was growing up. And he would sit on the porch of our home and tell me all kinds of stories and things I learned about history. My grandfather was born in 1899 before there were airplanes in the sky. One night in the summer of 1969, he watched a man set foot on the moon. You know what he said when he saw that? He said Americans can do anything."