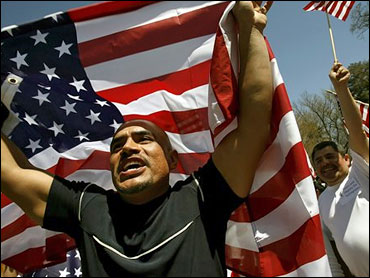 In the ongoing effort to make our national debate about all the wrong things, we may have reached a milestone with the controversy over whether its alright for the National Anthem to be sung in Spanish.

The blogs went nuts about it of course — going nuts is their natural state. Talk radio saw danger ahead — cover the children's ears.

I'm with them on insisting that everyone who wants to be a citizen should learn English. In an increasingly diverse country, common experiences have become rarer and rarer and our language is one of the few things we all share. There is strength in that.

But the anthem in English only? I don't get it.

It made me proud to be an American when they tore down the Berlin Wall as We Shall Overcome — an American spiritual — played on the young people's boom boxes. And who among us can forget how we felt when those brave Chinese students brought a papier-mache Statue of Liberty into Tiananmen Square.

When people take our symbols of freedom as their own, it doesn't weaken our values, it affirms they are universal. That makes us stronger, not weaker.

So I hope our anthem will be sung one day in a hundred languages and I am not worried that translating it will somehow dilute its message. Translation hasn't seemed to hurt the Bible.

And since I speak neither Hebrew nor Greek, I'm glad they went to the trouble on that one. Otherwise, I might have missed the whole thing.