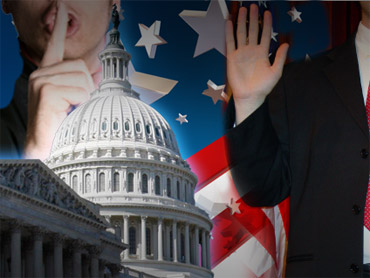 As the Senate faces a rapidly-approaching end to the current congressional session, many Democrats - as well as a number of top Pentagon officials - are pushing for quick action on the repeal of the military's "Don't Ask, Don't Tell" policy, which prohibits openly gay Americans from serving in the armed forces.

On Sunday, Defense Secretary Robert Gates announced he would be moving up the release of a long-awaited report detailing the possible ramifications of repeal, in order to allow the Senate sufficient time to hold hearings based on its findings before voting on the issue.

A handful of moderate senators have said the report, which will now be released on Nov. 30, 2010 instead of Dec. 1, 2010, will likely influence their decisions regarding the elimination of "Don't Ask, Don't Tell."

Michigan Senator Carl Levin said in a statement today that he thought the hearings would be a "boost to the goal" of repeal, adding that "passage of the Defense Authorization Act is essential to our troops and their families and to our national defense."

Joint Chiefs of Staff Chairman Adm. Mike Mullen also made a push for eliminating the measure during a recent CNN interview, during which he emphasized that the head of the U.S. Marine Corps, Commandant Gen. James Amos, would implement the repeal "no question," despite his personal opposition to eliminating "Don't Ask, Don't Tell" at the moment.

Levin, the chairman of the Senate Armed Services Committee, has faced increasing pressure to include a repeal of "Don't Ask, Don't Tell" in this year's Defense Authorization bill, major annual policy legislation that provides for a number of military-oriented provisions, including salary increases, medical benefits, and construction projects.

But some worry attaching the repeal could prevent the bill from passing through the Senate before the end of the year - which would mark the first such legislative failure in nearly 50 years.

"The Senate has passed a defense bill for 48 consecutive years. We should not fail to meet that responsibility now, especially while our nation is at war," Sens. Joe Lieberman (I-Conn.), Mark Udall (D-Colo.) and Kirsten Gillibrand (D-N.Y.) wrote in a joint statement earlier this month. "We must also act to put an end to the 'don't ask, don't tell' policy that not only discriminates against but also dishonors the service of gay and lesbian service members."

The House version of the Defense Authorization bill, which has already been passed, also includes language repealing the "Don't Ask, Don't Tell" policy.