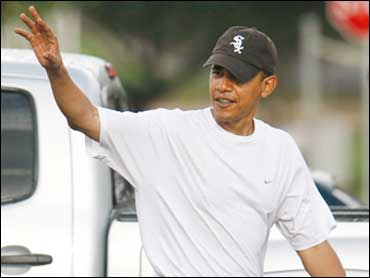 As the events unfold on the Gaza Strip, with Israeli planes attacking Hamas-controlled security compounds and Hamas vowing revenge, vacationing President-elect Barack Obama is keeping his own counsel.

"President-elect Obama is closely monitoring global events, including the situation in Gaza, but there is one president at a time," said Brooke Anderson, Mr. Obama's chief national security spokesperson.

Obama will be receiving an intelligence briefing today and the White House will stay in touch with the transition team, according to White House spokesman Gordon Johndroe.

"Hamas must stop launching rockets into Israel. The United States holds Hamas responsible for breaking the ceasefire," Johndroe said in a statement today about the Mideast situation. "Now the ceasefire should be restored immediately."

He also urged Israel to avoid civilian casualties. "We want the ceasefire to be restored, but we understand that Israel is reacting to the hundreds of rockets that have been fired upon the innocent people of Israel over the last few days," he said

In July 2008 Obama gave an indication of his views on the Israel-Palestine conflict.

Asked by the New York Times whether Israel should negotiate with Hamas in Gaza, he replied, "I don't think any country would find it acceptable to have missiles raining down on the heads of their citizens."

"The first job of any nation state is to protect its citizens. And so I can assure you that if -- I don't even care if I was a politician. If somebody was sending rockets into my house where my two daughters sleep at night, I'm going to do everything in my power to stop that. And I would expect Israelis to do the same thing."

"In terms of negotiations with Hamas, it is very hard to negotiate with a group that is not representative of a nation state, does not recognize your right to exist, has consistently used terror as a weapon, and is deeply influenced by other countries. I think that Hamas leadership will have to make a decision at some point as to whether it is a serious political party seeking to represent the aspirations of the Palestinian people. And, as a consequence, willing to recognize Israel's right to exist and renounce violence as a tool to achieve its aims. Or whether it wants to continue to operate as a terrorist organization. Until that point, it's hard for Israel, I think, to negotiate with a country that -- or with a group that doesn't recognize Israel's right to exist."