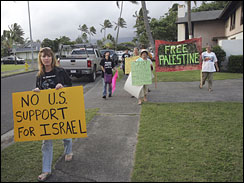 (AP)
He may be on vacation, but Barack Obama is by no means insulated from events taking place both at home and abroad.

Yesterday, the president-elect crossed paths with perhaps his first protesters since his victory on November 4th – a small group of pro-Palestine demonstrators upset over U.S. support for Israel, which is in the midst of an assault on the Gaza Strip.

"We are here to say to the President he's got a lot on his plate but we expect that he will take this on very seriously and really get moving to stop the killing," added Ann Wright.

The protestors told secret service agents outside Mr. Obama's home they wanted to deliver their literature to the president-elect, but they were turned away, with the secret service suggesting they talk to the DNC or reach out over the internet. The agents also refused to get a staffer from inside to come out to talk to them.

Obama passed about ten of the protesters when he motorcade left the compound yesterday, but according to the pool report, he "was sitting in the rear on the passenger side of his black sport-utility vehicle, and was not visible to the protesters, who were on the left side of the vehicle as it exited." He did not acknowledge the group.