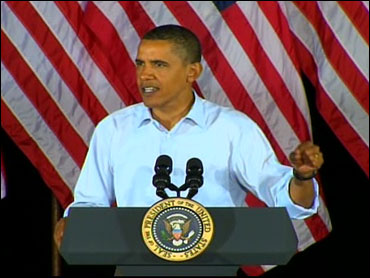 (CBS)
Earlier today, President Barack Obama spoke to the nation's students in a widely-awaited address. In the runup to the speech, some Republicans had expressed qualms that the president was seeking to indoctrinate America's children to his socialist agenda." The White House ridiculed the claims, saying President Obama wanted to send a message to students to assume responsibility for their education. Now there's no more mystery. With the text finally in hand, we can uncover the socialist subtext hidden within. (I've annotated the more revealing excerpts.)

The President: "Hello everyone – how's everybody doing today? I'm here with students at Wakefield High School in Arlington, Virginia. And we've got students tuning in from all across America, kindergarten through twelfth grade. I'm glad you all could join us today. I know that for many of you, today is the first day of school. And for those of you in kindergarten, or starting middle or high school, it's your first day in a new school, so it's understandable if you're a little nervous. I imagine there are some seniors out there who are feeling pretty good right now, with just one more year to go. And no matter what grade you're in, some of you are probably wishing it were still summer, and you could've stayed in bed just a little longer this morning."

Translation A favorite Marxian approach. Dates back to Engels' days in Manchester, England. The implicit message to impressionable minds: It's fine to laze away the day. Don't worry about not being a productive part of society. Mom and Dad (and then the state) will be there to support your lack of initiative.

The President "I'm here today because I have something important to discuss with you. I'm here because I want to talk with you about your education and what's expected of all of you in this new school year."

Translation What's "expected of you?" No dice. Encouraging kids to accept top-down directives - that's a prescription for trouble, if ever I heard one. Not to push it too far, but the Soviets used to sell a similar line of mumbo jumbo. Remember all that claptrap about the dictatorship of the proletariat? We should steer clear. Let's uphold Jeffersonian principles and leave local communities to decide.

The President: "I've talked about your parents' responsibility for making sure you stay on track, and get your homework done...but at the end of the day, we can have the most dedicated teachers, the most supportive parents, and the best schools in the world – and none of it will matter unless all of you fulfill your responsibilities."

Translation "Unless all of you fulfill your responsibilities....?" Pardon but what if we decide we'd rather not? Some education czar sics a couple of apparatchik goons? That's why the lib-left is so intent on watering down the Second Amendment. (BTW: Notice that "czars" came out of Russia. So did Bolshevism. Purely circumstantial? Don't be so sure. But since the MSM is utterly brain dead, we'll have to wait for Glenn Beck to unearth the full story.)

Translation Individual responsibility. OK, a plank that all sides of the political spectrum can rally around. Now if Obama could only shake free of Pelosi and Reid, maybe we would hear more of that. Probably a pipedream, but hey, you never know.

The President: "Now I know it's not always easy to do well in school. I know a lot of you have challenges in your lives right now that can make it hard to focus on your schoolwork. I get it. I know what that's like. My father left my family when I was two years old, and I was raised by a single mother who struggled at times to pay the bills and wasn't always able to give us things the other kids had. There were times when I missed having a father in my life. There were times when I was lonely and felt like I didn't fit in."

Translation Tell it to Hillary. We've already heard how it takes a village. Look, Dan Quayle warned everyone about Murphy Brown, but did you listen? Now we're reaping what your Hollywood fellow traveler friends sowed.

The President: "So I wasn't always as focused as I should have been. I did some things I'm not proud of, and got in more trouble than I should have..."

Translation So Sarah was right all along. Wonder who else he was palling around with besides Bill Ayers?

The President: "But I was fortunate. I got a lot of second chances and had the opportunity to go to college, and law school, and follow my dreams.... Some of you might not have those advantages."

Translation Of course you had opportunities. That's what happens when the state doles out rewards based upon politically correct diktats.

Translation Let's set rules of behavior. Also, get a load of the unsubtle warning: Come to school - or work - with a bad attitude and the state will deal with transgressors. You don't get more socialist than that!

The President: "That's why today, I'm calling on each of you to set your own goals for your education – and to do everything you can to meet them. Your goal can be something as simple as doing all your homework, paying attention in class, or spending time each day reading a book. Maybe you'll decide to get involved in an extracurricular activity, or volunteer in your community. Maybe you'll decide to stand up for kids who are being teased or bullied because of who they are or how they look, because you believe, like I do, that all kids deserve a safe environment to study and learn. Maybe you'll decide to take better care of yourself so you can be more ready to learn. And along those lines, I hope you'll all wash your hands a lot, and stay home from school when you don't feel well, so we can keep people from getting the flu this fall and winter."

Translation Vladamir Lenin would have been proud. It's Big Brother with a capital B with the gall to instruct our kids on the niceties of personal hygiene. Par for the course coming from a confirmed statist.

The President: "Some of the most successful people in the world are the ones who've had the most failures. JK Rowling's first Harry Potter book was rejected twelve times before it was finally published. Michael Jordan was cut from his high school basketball team, and he lost hundreds of games and missed thousands of shots during his career. But he once said, "I have failed over and over and over again in my life. And that is why I succeed." These people succeeded because they understand that you can't let your failures define you – you have to let them teach you."

Translation Impressionable young minds won't pick up on this, but follow what's going on. Remember the trillions spent by Obama and Bernanke since January? When he bankrupts the economy and then nationalizes the means of production, the president can cop a plea. "Oops, sorry. But we won't let failure keep us from trying." Puh-leez.

Translation Comparing the Founding Fathers to a motley crew of relativistic, anything-goes libertines out in San Francisco and Silicon Valley? Well, Google this: Bite me.

The President: "So today, I want to ask you, what's your contribution going to be? What problems are you going to solve? What discoveries will you make? What will a president who comes here in twenty or fifty or one hundred years say about what all of you did for this country?"