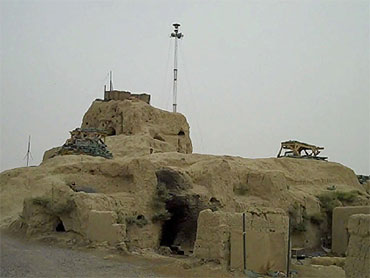 It rises up above the Helmand River plains like some fantastic Salvador Dali creation - the mud fort of Barcha, or Castle Gray Skull as the Marines have renamed it. It looks like an enormous hazelnut ice cream cake that has half melted into grotesque curves and overhangs, and then been flash frozen again.

The huge mud fortress was apparently built by the Soviets after they invaded Afghanistan in 1979. It has multiple caves and dugouts which can be used as firing positions and from the top - about 60 feet above the surrounding fields - you can see 360 degrees over the fields, way out to the desert at the east and the west that flanks the fertile green strip along the Helmand River banks. It is the perfect observation post. And with a 50-caliber machine gun and a sniper right on top, it pretty much controls all the territory around as far as the eye can see.

Lt. John Adams of Kilo Company is in command at Barcha - he says the word means "bayonet" in the local Pashto language - and he proudly showed us around his mud fort. This will be his home for the next seven months.

In the early afternoon we sat down with some of the local elders, who had come to the mud fort to talk to the Marines about their concerns. There were about 12 men, all bearded and wearing turbans, but all deferred to the most influential man, Haji Mohammed Agha. His complaint was interesting - there is too much dust on the road. And, he thought, it was the Marines' responsibility to fix that. Every time the Marines' armored vehicles passed by they left a trail of dust - "it makes the children cough, and everyone turns the same color so you can't recognize anyone!"

It is true that the road in this part of Garmsir has a thick layer of that very fine dust - moon dust the Marines call it - that gets into everything. And it is true that the Marines' heavy vehicles kick up more dust than the small sedans or motorcycles that the locals use for transport. But Lt Adams was not about to sign on as a major road contractor for the district - that is something the Afghan government should be responsible for. But he put it very tactfully.

"Haji Mohammed will remember that when the Marines first came here this road was full of IEDs, and it was too dangerous to travel on," he said. The elders all nodded in agreement. "And he will remember that Marines were injured and killed in the effort to clear this road." Haji Mohammed realized that he was going to lose this argument. "So maybe Haji Mohammed could petition the district government to get the road fixed?"

I happened to be sitting right next to Haji Mohammed, and to save face he leaned over and grabbed the front of my shirt and shook it and said "the last time I was there I grabbed that governor's shirt by the front like this, and he still wouldn't listen to me!" The elders all laughed, Haji Mohammed had not lost any respect, and then to show that he also had not meant any disrespect to Adams and the Marines, he said to Adams "I hope you don't mind if I speak my mind frankly. That dust really is too much."

It was a delicate dance of manners between a young American Marine officer and an Afghan tribal leader more than twice his age, but everyone emerged with honor intact. The Marines are happy that the locals are at least talking to them and not helping the Taliban to shoot at them. The elders are happy that the Marines have brought security to this area around the mud fort, where they can grow their wheat and their corn. And everyone still has to put up with that infernal, choking, eye-reddening dust.