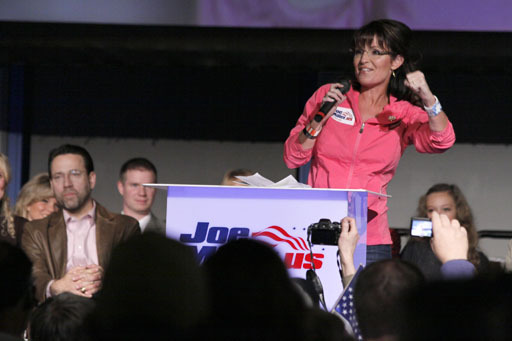 Sarah Palin is fighting elites: the GOP establishment, know-it-alls like Karl Rove, the mainstream media, the Federal Reserve. What unites all fronts in this battle is her conviction that people who claim to know the truth, or what's best for you, do not. Palin doesn't let people tell her to be quiet, and you shouldn't, either.

It is a compelling message. It also requires the very thing Palin rails against--that is, silencing even small voices of dissent. I discovered just how small when I tried to take part in the conversation among Palin's fans on her Facebook page. Palin's brand management rivals, if not surpasses, that of marketing behemoths like Apple, Nike, or Coca-Cola, all of which are known for their control over the tiniest details of their products.

On Monday, Palin rebuked a reporter on her Facebook page. "Do Wall Street Journal reporters Read the Wall Street Journal?" she asked. The Journal reporter, Sudeep Reddy, had asserted that Palin had gotten her facts wrong in a recent speech when she said,"Everyone who ever goes out shopping for groceries knows that prices have risen significantly over the past year or so." Grocery prices, Reddy pointed out, "haven't risen all that significantly, in fact"--inflation is at 0.6 percent for the first nine months of 2010. Palin responded: "Really? That's odd, because just last Thursday, November 4, I read an article in Mr. Reddy's own Wall Street Journal titled "Food Sellers Grit Teeth, Raise Prices: Packagers and Supermarkets Pressured to Pass Along Rising Costs, Even as Consumers Pinch Pennies."

Palin ends her post with what is sometimes known as an end zone dance. "Now I realize I'm just a former governor and current housewife from Alaska, but even humble folks like me can read the newspaper. I'm surprised a prestigious reporter for the Wall Street Journal doesn't."

At least she called you prestigious, Mr. Reddy! Palin seemed to have his number. But then I read Reddy's critique and the story Palin says undermines it. The story Palin cites to support her claim doesn't do that. In her speech, Palin said that "prices have risen significantly over the past year or so." The Journal article says prices are only "beginning" to rise. The time period of "significant" increase Palin is talking about is referred to in the first sentence of the exculpatory article as "the tamest year of food pricing in nearly two decades."

I made this point in a few sentences and posted them on Palin's Facebook page in the space allotted for readers to participate in the conversations she starts. I wanted to see if any of the other participants would respond, as they sometimes do. They didn't--because within two minutes, my post had been deleted from the steady stream of acclaim from Palin fans congratulating her for tweaking the media and urging her to run for president. It's the first time I've been kicked out of a place of worship.

Whoever administers the page for Palin had deleted me so fast I didn't even have a copy of what I'd written. I posted another similar note:

I think Governor Palin and the author are talking about two different time periods. Governor Palin says "everyone who ever goes out shopping for groceries knows that prices have risen significantly over the past year or so." The article she cites, and quotes above, says that the "inflationary tide is //beginning.//" Also, Governor Palin uses the word "significantly" which can't apply to the first nine months of the year (since grocery prices increased at a record slow pace) and if it's just the last couple of months a term like "moderate" might have been more precise. Recent price increases have not been like the 6 percent increase of 2008.

There are a lot of interesting questions related to food prices. Do statistics really capture what people are feeling? How do price statistics take quantity changes into account? Is monetary policy really what's causing the prices to increase? What if it's foreign demand, as the article cited by Palin argues?

Once again, my attempt to kick off this conversation did not happen. My second post was also deleted.

I have written about how carefully Palin's staff combs her Facebook page for any offending or controversial statement. Under constant scrutiny and assault, Palin is wise to exert extra control over the communication she can control. Still, I didn't appreciate how tight the screen was or how little she trusts her readers. My experience suggests that any challenge to Palin, no matter how mild, is not allowed. These tight clubhouse rules are an echo of the ones Palin says are trying to stop the grass-roots movement she champions.

There is another possible explanation for my exile: Maybe any post from me, no matter what the content, is automatically deleted. It wasn't personal, in other words, nor was it related to the content. It was just a matter of a stray Facebook setting. I tried an even more anodyne post to test this theory, writing: "shrinking product sizes are so irritating."

That post did survive, thankfully. I'm very proud. I believe it is the basis for a platform around which the nation can rally. At least until it's deleted.

How's the economy doing? Depends on which party you belong to.
The Supreme Court should strike down an old citizenship law that discriminates against fathers.
How many terrorism tips does the government get every day?