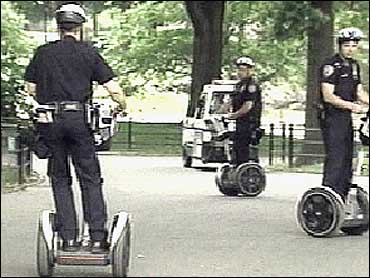 I just learned about a profession that I didn't know existed -- there are people who get paid for predicting trends and guessing what will soon be considered "cool." Then they sell this information to various businesses and advertisers. And here's the kicker -- sometimes they're right, and sometimes they're wrong. Where do I sign up for this job?

One method they use is to send people to malls to observe kids. The assumption is that whatever kids are doing today, all of us will be doing next Thursday. There is some logic in this. We live in a youth-oriented culture, and adults often imitate kids. Grown-up men have their ears pierced and wear baseball caps backwards, women old enough to be grandmothers wear shirts that expose their bellies, and older men and women drive little sports cars that they can barely get in and out of.

But I don't know if I'm ready to say that our entire society will be driven by young people. I don't think that we'll all necessarily adopt the language of some kids. Otherwise, soon the Pledge of Allegiance will begin with the words, "I, like, pledge allegiance to the, you know, United States of America..."

Another method the trend spotters use is to take existing trends, and assume they will continue to grow. For example, it's not exactly a long shot to say that the Internet will become more and more important in people's lives. I think I can make some pretty good predictions based on current trends: