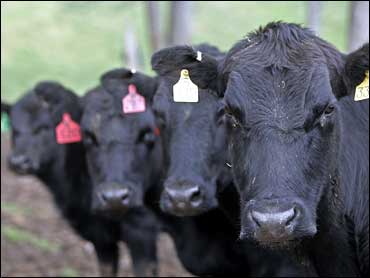 (AP Photo/John Bazemore)
If there's a silver lining in the economic downturn, it's that food prices are rising at a slower pace than last year. However, that silver lining comes with a price. As The Wall Street Journal reported Friday, American farms — which account for about 13 percent of the country's gross domestic product — are losing profits.

The U.S. Agriculture Department projected in a report Thursday that profits at farms will fall 38 percent this year, the newspaper reported.

"It is safe to say that the global recession has finally shown up on the doorstep of the agriculture economy," said an agricultural economist at Wells Fargo & Co. told the paper.

In dollar figures, farmers will earn a net total income of $54 billion this year. That's $33.2 billion less than what the agricultural industry was expected to earn last year, nearly a record high. With a reduction in corn, wheat and pork prices from last year, the market will pass some relief on to American consumers, economists told the paper. They expect the Consumer Price Index to rise just 3 percent this year, less than the high 5.5 percent recorded last year.

The recession isn't just hitting farmers in terms of their profitability — the industry's profit forecast is $9 billion lower than the government's 10-year average for farm profits — but also in their assets. Also on Thursday, the Federal Reserve Bank of Chicago reported that the price of good quality farmland in Iowa and Michigan fell 5 percent in the last year, the paper reported.

With land counting as the biggest source of collateral for farmers, they will likely be able to borrow less because of the drop in value. To fight against the fall in profits and reduction in the worth of their assets, farmers have looked to the government for help.

The Obama administration has already promised to temporarily pay more for dairy products than it originally pledged, sending $243 million into the industry through its dairy-price support program.