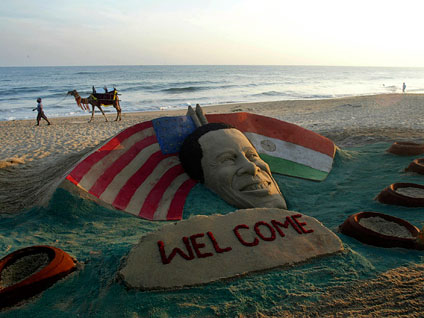 The president will use the trip to emphasize job creation at home, the issue that dominated the midterm election.

He told reporters, "the whole focus is on how are we going to open up markets so that American businesses can prosper, and we can sell more goods and create more jobs here in the United States."

Despite the mileage that Air Force One will clock on the trip, the president won't be able to put much distance between himself and the political turmoil at home. During the long hours on the presidential 747, he's expected to confer with top aides on the politically altered strategy for the second half of his term. As he seeks common ground, Republicans are stepping up their threats to fight his agenda. His absence will be a first test of whether newly-empowered Republicans follow the old adage that "politics stops at the water's edge."

The trip will also provide an up-close look at foreign reaction to the election outcome. Michael Green, who served as an Asia policy advisor to President George W. Bush, predicts the foreign media will portray Barack Obama as weakened and "turning inward more to deal with the challenges of a divided government." Green, now with the Center for Strategic and International Studies, says the president can overcome that view by showing "he is fully committed to engaging with the region." The White House insists the ambitious trip will do just that.

Green told CBS Radio News the trip is a prime opportunity for the president to put adversaries including North Korea and Al-Qaida on notice that "U.S. policy is strong, our alliances are strong and there's bipartisan support. Green noted enemies have a history of over-interpreting "these kinds of electoral results as as sign of collapsing leadership because in those countries if the population turned on the leader, they'd be done."

Another leading expert, Council on Foreign Relations President Richard Haas, believes the election outcome could have an impact on the president's foreign mission. In an on-line article, Haas noted, "this is the political opposite of having wind in your sail, and in the short run it doesn't help." The veteran foreign policy expert also believes the departure for Asia could hurt the president domestically. He speculates, "a lot of Americans will say, the message you should have taken from the election is to focus on jobs and the domestic economy, why are you now going to Indonesia and India?"

The White House hopes the economic focus of the trip will answer that question.

The president will spend three full days in India, his longest visit to a foreign country since taking office. Michael Froman, the Deputy National Security Advisor for Economic Affairs, said the visit would underscore "one of the most important emerging economic relationships for the United States."

The president will stop first in Mumbai, India's commercial center. With a population of 1.2 billion people, India is an ever- rising power and the U.S.wants a bigger piece of the action.

The president will speak to a business summit in Mumbai to emphasize the goal of increasing commercial ties. Deputy National Security Advisor Ben Rhodes said Mr. Obama would emphasize, "the enormous potential for both countries to expand growth and opportunity..."

Of course when many Americans think of dealings with India, call centers and outsourced U.S. jobs come to mind. Officials acknowledge that image as "part of the relationship" but they say the president will emphasize that India is a huge market for the U.S. Foreign policy advisor Froman said the President would be direct about the need to ensure "there's a level playing field" in the U.S.-Indian relationship. At least 250 U.S. business executives will join the President in India to drive home the point.

The President and his business entourage are also expected to have some blunt discussions with their Indian counterparts on concerns about Indian liability laws and other policies that stand in the way of closer ties.

While in Mumbai, the president will stay at the landmark Taj Majal Hotel, scene of the 2008 terror attack that killed 166 people. The visit is aimed at symbolizing U.S.support for India's counter-terrorism efforts. Officials say that because of security concerns, the Secret Service told the White House to book the entire 570-room hotel. Mr. Obama is expected to meet with families of the victims of the attack. He will pay his respects at a memorial to the victims.

From Mumbai, Mr. Obama travels to New Dehli for meetings with Prime Minster Manmohan Singh. White House officials describe a close relationship between the leaders of the world's two largest democracies. They are expected to discuss the major economic issues and the terror threat. India has recently raised concerns over what it views as a lack of intelligence-sharing. The Obama administration's complex relationship with India's archrival Pakistan will also be on the agenda. The National Security Council's Ben Rhodes said the President would emphasize that dealing with Pakistan "does not take place with in any kind of zero sum dynamic." He told reporters that while the relationship has often been viewed that way, "it is the opposite with this administration."

But Terisita Schaffer,director of the South Asia Program at the Center for Stategic and International Studies said, "India is bound to be uncomfortable with the fact that the U.S.pays so much attention to Pakistan."

Mr. Obama faces a diplomatic balancing act on the India-Pakistan issue. The U.S.needs Pakistan's cooperation in the anti-terror effort even as it works to bolster the relationship with India. Officials indicate the President will quietly urge continued Indian-Pakistani negotiations.

From India, the president will travel to Indonesia, the world's largest Muslim nation. He will use a speech and a visit to a major mosque to again reach out to the Islamic world. He will also announce what the White House describes as "a comprehensive partnership" on security and economic issues.

Indonesia is also a key player in the anti-terror effort. Mr. Obama is very popular in Indonesia where he lived for four years when he was a child.

Next week in Seoul, the president will attend the G20 summit. On the sidelines, he will hold his seventh meeting with Chinese President Hu Jintao. The Obama administration has urged China to allow appreciation of its Yuan currency. The administration says the Yuan is being held at artificially low levels that hurt U.S. jobs and competitiveness.

(At left, watch a preview of Obama's interview on "60 Minutes" this Sunday.)

The pending U.S.-South Korean Free Trade agreement will dominate the president's talks with South Korean President Lee Myung-bak. The trade pact was signed in 2007 but the Senate has not ratified it. Ironically, the GOP midterm election victories could improve prospects for final approval because most of the opposition to the agreement has come from Democrats.

The U.S. and South Korean leaders will also discuss North Korea's nuclear ambitions and the evolving leadership changes in Pyongyang.

Mr. Obama will speak to U.S.troops in South Korea on Veterans day. He'll pay special tribute to Korean War veterans on the 60th anniversary of the start of the conflict.

The long trip wraps up in Yokohama, Japan where the president will attend the annual summit of Asia-Pacific leaders. He will hold his first meeting with Japan's new prime minister, Naoto Kan.