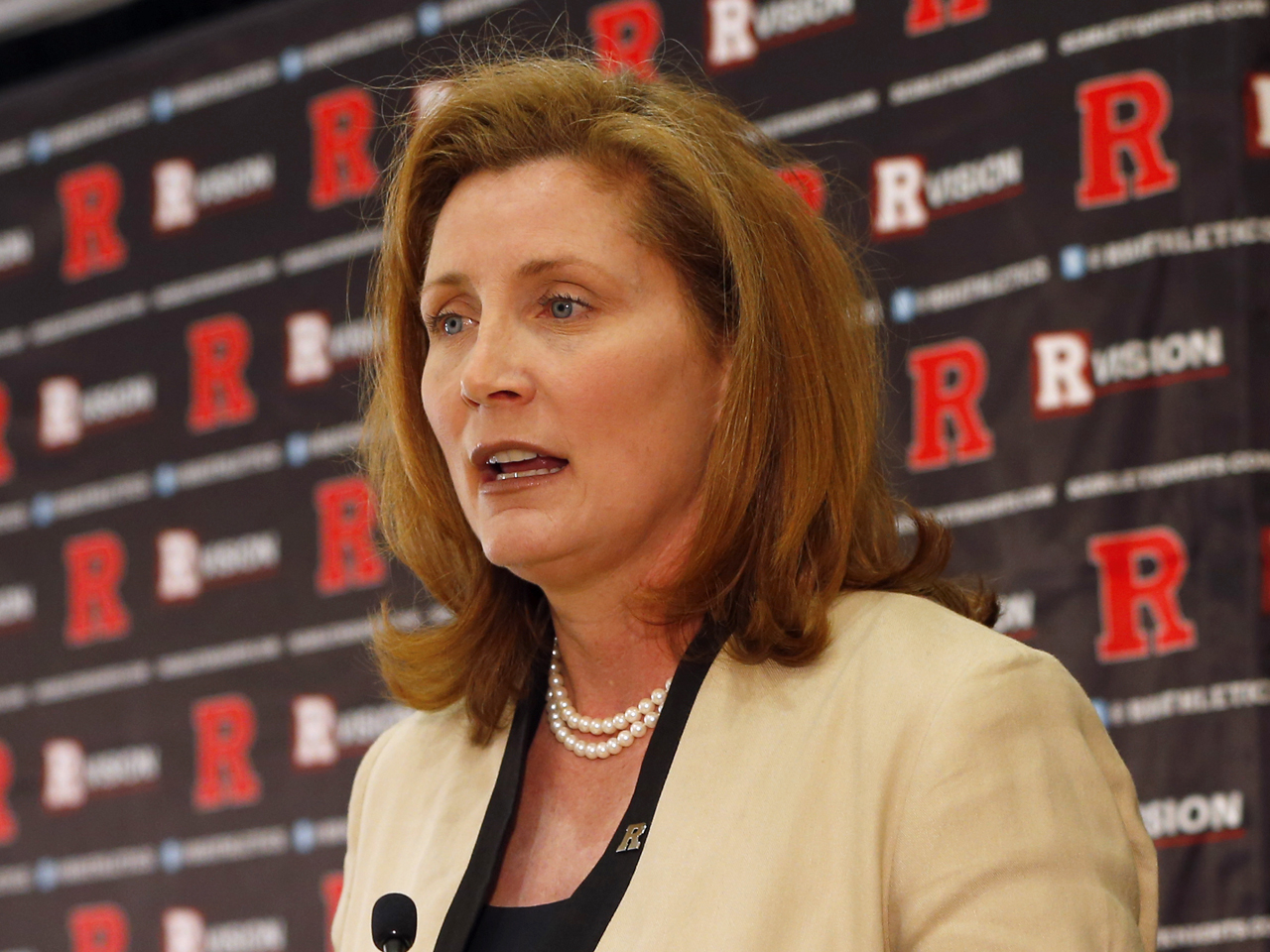 NEWARK, N.J. Incoming Rutgers athletic director Julie Hermann was involved in a discrimination lawsuit while an administrator at Louisville, where an assistant track coach said she was fired for complaining about discriminatory treatment.

Information about the case came to light Tuesday, amid continuing discussion about Hermann's treatment of players while she was a volleyball coach at Tennessee in the 1990s.

The earlier episodes from Hermann's career are particularly troubling for Rutgers, which hired her after former basketball coach Mike Rice was fired in April for physically and verbally abusing players and former athletic director Tim Pernetti was forced to resign for his handling of the problem.

The New York Times first reported on details of the Louisville suit which Mary Banker, a former assistant men's and women's track coach, filed against the University of Louisville Athletic Association, saying she was let go in 2008 after she complained to Hermann and then human resources about allegations of gender and sexual discrimination. Hermann was the executive senior associate athletic director for Louisville at the time.

Hermann testified at a 2010 jury trial about the dismissal. A jury found in Banker's favor, awarding her $300,000 for mental and emotional distress. But the university appealed and the Kentucky Court of Appeals overturned the verdict in February.

The appellate ruling in the case said that, "even in a light most favorable to Banker," Louisville proved Hermann and the head track coach, Ron Mann, "had contemplated, if not decided, not to renew Banker's contract prior to Banker's complaint to HR."

The case is now before the Kentucky Supreme Court, which has not yet decided whether to take it.

Besides the revelation of the sexual discrimination lawsuit, a member of the Rutgers' athletic director search committee said she was dumbfounded that the firm hired to vet potential candidates for the athletic director's job never uncovered the allegations by former Tennessee women's volleyball players that Hermann verbally abused players while she was their coach.

Yet, in another development on Tuesday, a high-ranking Tennessee official and a former graduate assistant each voiced support for Hermann during her tenure with the Vols.

Still, the Louisville lawsuit is bound to bring greater focus on the hiring of the 49-year-old Hermann, just days after the Star-Ledger of Newark reporter former players' claims that she humiliated and emotionally abused players while coaching Tennessee's women's volleyball team.

Hermann on Monday said that she has no plans to resign and Rutgers president Robert Barchi later said the university was standing behind her.

Whether Hermann stays or goes, the past two months have been a huge embarrassment for Rutgers, which was celebrating an invitation in November to join the Big Ten Conference in 2014.

After Rice was fired and Pernetti was forced to resign, the university said new basketball coach Eddie Jordan had a degree from Rutgers when he didn't. There was additional controversy when men's lacrosse coach Brian Brecht was suspended for verbally abusing his players following a university-wide investigation into all Scarlet Knights coaches. Brecht missed the final two games of the season.

Susan Schurman, dean of the School of Management and Labor Relations at Rutgers, was on the search committee for the athletic director but out of the country for much of the process.

She said she was on one conference call during which the search firm briefed the members on how the process was going to work. She remembers the firm saying that they had "incredible interest" in the job and many qualified people were interested. No names were discussed. She also remembers that the committee was told they would be able to say if a candidate was acceptable, but would not actually vote on candidates.

Schurman read in the newspaper that Hermann's name wasn't among the 60 passed along from the search firm, which she found "interesting, because she's clearly a pretty prominent person."

"I wasn't on the executive committee, but I have to say the reason you hire executive search firms, at least when I was vetted for the job at Rutgers several years ago, they appeared to go back to kindergarten," she said. "One of the primary reasons for using a search firm is that they're supposed to completely vet a candidate for a senior management position, so I'm a little mystified as to why this comes from the press and not the search committee."

Schurman is not taking a position as to whether there is validity in the complaints against Hermann, because complaints and lawsuits are often filed against administrators and high-level university officials. But, she said, the search firm should have turned up that information.

Joan Cronan, women's athletic director emeritus at Tennessee, said she in a statement that she holds Hermann in high regard, and that while the ex-coach's tenure in the 1990s "was a very frustrating time for everyone connected with the volleyball program, I do not recall it being an abusive situation."

Hermann denied having knowledge of a letter players say they submitted to the school. She acknowledged she made mistakes, but says she has matured and believes she is qualified to lead Rutgers, an athletic program mired in scandal.

"I believe she is well-prepared for her new role at Rutgers University," Cronan wrote. "After Julie's sixth season as the head volleyball coach, I decided that a change was needed, and I moved Julie to a position in athletics administration.'

Marc Gesualdo, a graduate assistant for Vols' sports information department from 1994-96, said he didn't see any instances of abuse while handling media inquiries for the volleyball program under Hermann. He attended virtually all of Tennessee's games during that stretch, but he wasn't at all practices.

"Never did I see anything that I would deem as inappropriate or just like so outlandish that it was bordering on abuse," Gesualdo said. "I can't say I saw anything at all that bordered on abuse."

While Hermann received support from Cronan and Gesualdo on Tuesday, athletic directors at two of the most prominent schools in the Big Ten Conference — Ohio State and Michigan — said the recent problems at Rutgers should not derail the university's entry into the league in 2014.

Despite continued support from Rutgers President Robert Barchi, Hermann's future at the Scarlet Knights' next athletic director could be cloudy after former players at Tennessee said she emotionally and verbally abused them. While the Rutgers board of governors is the only group that can fire her, New Jersey Gov. Chris Christie can easily influence a decision if he wants.

Christie said Tuesday that he has "absolute confidence" in the president of Rutgers University even as some lawmakers have called for Barchi to step down amid the embarrassing revelations for the university's athletic department.

Christie said he doesn't want to micromanage the university and won't weigh in on whether Hermann should start at the school.

"Not my call," he said Tuesday during his monthly call-in show on New Jersey 101.5 radio. "I'm confident in President Barchi's judgment."

"Lets' not engage in the character assassination that's going on here," said Christie, who said he does not know and has not met Hermann. "I understand that there are some people that feel differently about it. It doesn't matter. What matters is: what did the administration at Rutgers believe?"

Some lawmakers, including likely Democratic gubernatorial candidate Sen. Barbara Buono, have questioned whether Barchi is fit to lead the state's flagship university.

"I have lost all confidence in President Barchi's ability to effectively guide our state university," Buono said in a statement Tuesday.

Hermann, who played volleyball at Nebraska in the 1980s and is a native of Nebraska City, Neb., is scheduled to begin her new post June 17.