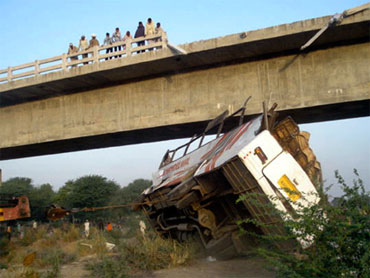 A bus fell from a bridge into a dry riverbed in northwestern India early Monday, killing at least 26 students and teachers on board, police said.

Another 34 passengers were injured, 10 of them seriously, in the accident in Sawai Madhopur district, nearly 115 miles west of Jaipur, the capital of Rajasthan state, said police official Vikas Kumar.

All the injured have been hospitalized, he told The Associated Press.
Kumar said the driver apparently lost control of the vehicle and it smashed through bridge railing and plunged into the riverbed.

The victims were from a teachers' training institute and were returning to Khanpur in Rajasthan state after visiting the Hindu pilgrimage center of Haridwar in Uttarakhand state.

Accidents occur frequently on roads in India and are often blamed on reckless driving, aging vehicles and overloading.