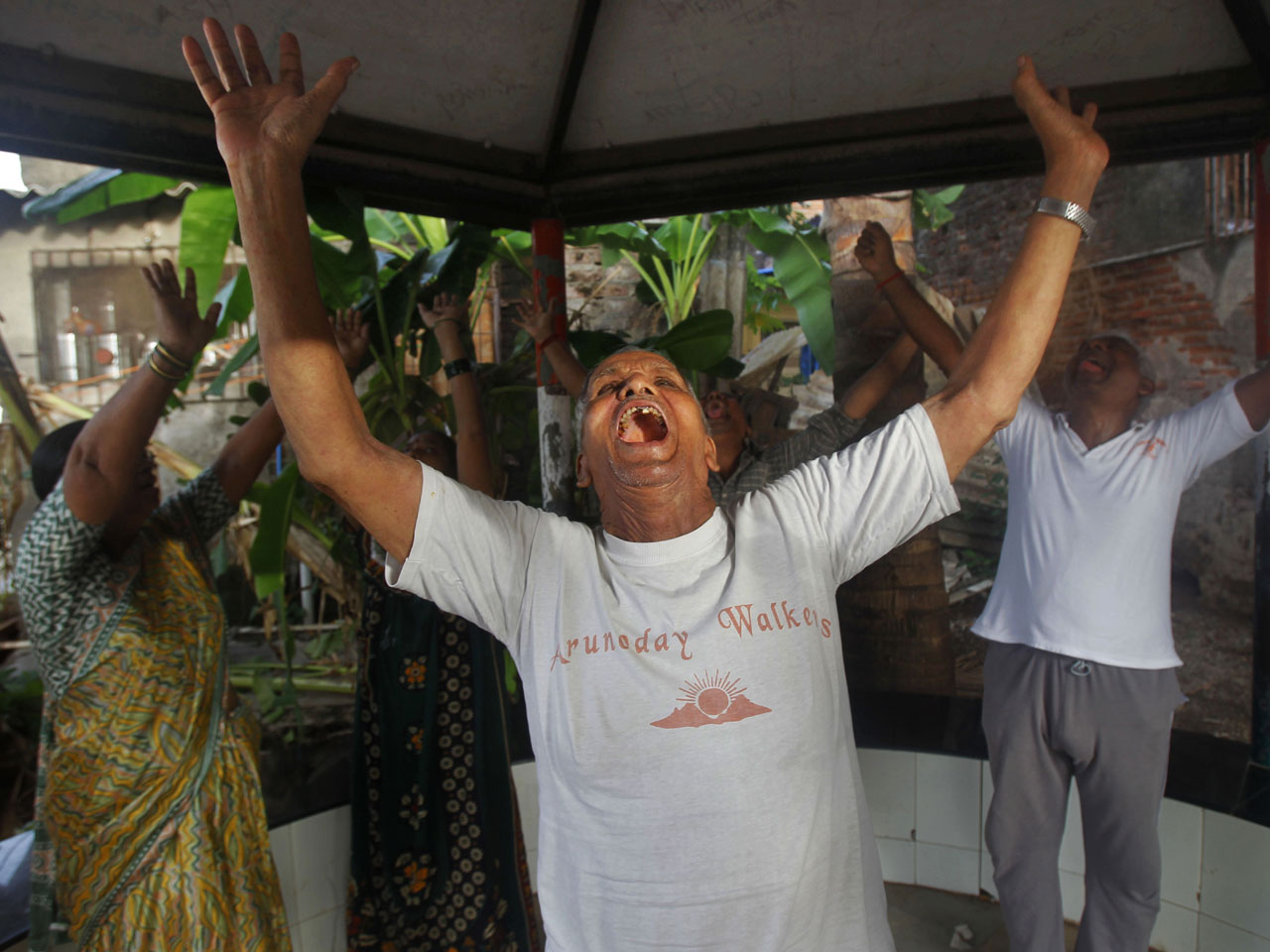 (AP) MUMBAI, India - For the last week, the laughter around Sheetal Talao pond in suburban Mumbai has taken on a muzzled quality.

On June 18, Mumbai's high court told police to do something about the laughter that erupted beneath Vinayak Shirsat's windows each morning, causing his family "mental agony, pain and public nuisance," according to the Press Trust of India.

Since then, members of the Sheetal Jogging Association -- who have been coming to the pond for three years for laughter yoga, devotional singing and light exercise -- have been trying to contain their mirth.

Sheetal Talao is, in truth, not a nice pond. The water is low and scuzzy with trash. But it's the only open space in a neighborhood of winding lanes in the northern suburbs of India's densely packed financial capital.

The single spot of constant shade -- a small gazebo -- is right in front of Shirsat's apartment, a three-story pink building with black bars on all the windows. Nearby are two curved benches, rising from a small plot of red mud and weeds, that the club uses for meditation and laughter.

"Only this much space we've got. Where can we go?" said Prabhakar Naidu, 45, who said that since he started laughing he's been able to walk up stairs without getting winded.

Before the police and courts got involved, a dozen club members would gather around 7 a.m. to sing bhajans -- devotional songs -- and clap for seven minutes. Then they laughed out loud for two minutes.

They would hold their ear lobes, tilt their heads back, and stretch their faces wide into smiles. "Ooh ooh, ha ha," went the chant. Then they would sweep their arms to their toes and reach for the sky, opening their mouths wide to say, "Ha ha ha!"

"If you are laughing, the mind becomes cool," he said.

Physician Madan Kataria claims to have founded the first laughter yoga club in Mumbai in the mid-1990s, based on the notion that laughter -- whether real or fake -- confers physiological and psychological benefits. His website says there are now more than 6,000 laughter clubs in 60 countries.

On Tuesday morning, it seemed as if the members of the Sheetal Jogging Association were trying to whisper as they laughed, opening their mouths to gasp, "ha ha ha ... ha ha ha." They kept a pillow of air in their palms as they clapped and sang out timorously to their gods.

Some days, in fact, they don't laugh at all anymore.

"People are afraid. He's from a family of lawyers," Naidu said, referring to Shirsat. "We tried to mediate with him, but he's not interested. He said, `We'll see you in court."'

Shirsat declined to comment for this story. "We are not interested because the matter is sub judice," he said in a soft voice from behind his big gate. "Please excuse us."

Other neighbors are more tolerant.

"It was not bothering me or my family," said Flory Rufus Leitao, 50, who lives just down from the gazebo in a small pink house. "They weren't shouting or screaming."

After a five-minute rest Tuesday, the laughers lined up for exercise, with a larger group of around 30 people. Standing in motley rows, barefoot, in flip flops or sneakers, wearing shorts and saris, they rolled their heads, swung their arms, circled their hips, stomped their feet, and ended with vigorous kicks.

Manjula Raut, 68, said she joined the group after having heart bypass surgery. "I could not walk properly when I started," she said. "Now I'm feeling very nice. I come every day."

Sadanand Ghate, 43, Sheetal Jogging Association's president, said he and a dozen other members went to the police station and tried to explain that they are seeking peace, not disturbing it.

"We are not making sounds that are harmful," he said. "We are doing a good thing."

Senior police inspector Neelkanth Shivali said he asked the group "not to make much noise," declining further comment because of the ongoing court case.

The next hearing is Thursday. Some members want to fight for their right to laugh, others don't.

"We come here for health and mental peace," said Ranjana Agarwal, 70, a cancer patient. "If we get into fights, the whole purpose of coming is defeated."