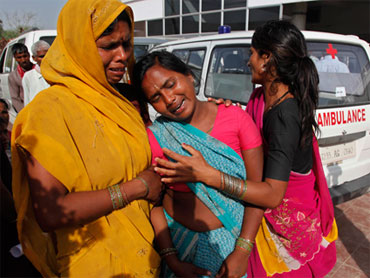 A stampede broke out at a Hindu temple in northern India on Thursday as thousands of people jostled one another to get free clothes and food, leaving at least 63 people dead and dozens more injured, officials said.

Most of the victims were women and children, officials said.

The force of the stampede was so great that it knocked down a gate at the temple compound in Kunda, a small town 110 miles (180 kilometers) southeast of Lucknow, the capital of Uttar Pradesh state.

About 44 worshippers were injured in the crush of people at a temple belonging to a popular local religious leader, said Ashok Kumar, a senior government official.

Thousands of farmers and villagers had gathered at the temple around noon to receive free goods to mark the anniversary of the death of the wife of the religious leader, Kripalu Maharaj, said Brij Lal, a local police official.

By late afternoon police had cleared the compound and started the process of identifying the bodies, Kumar said.

Hundreds of people gathered at a nearby hospital for news of their family members.

"She had just wandered in to see what was happening," said Gudal, a 38-year-old farmer whose 7-year-old daughter, Ranjana, was killed. Gudal, who uses only one name, wept as she spoke.

Leelawati, 32, cried as she waited to see the body of her 11-year-old daughter, Lakshmi, who also died in the stampede.

Deadly stampedes are a relatively common occurrence at temples in India, where large crowds - sometimes hundreds of thousands of people - congregate in small areas lacking facilities to control big gatherings.

In 2008, more than 145 people died in a stampede at a remote Hindu temple at the foothill of the Himalayas.