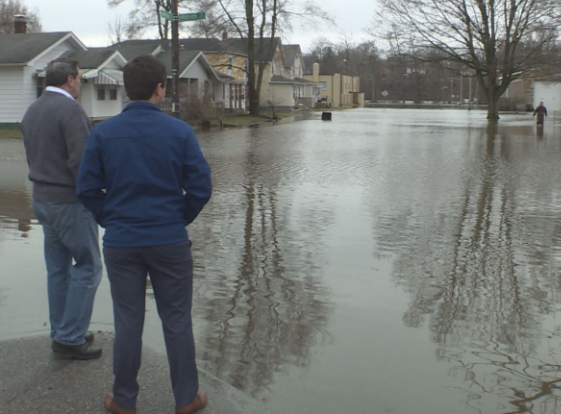 DEMOTTE, Ind. -- A levee breach along the Kankakee River in northwestern Indiana has local officials urging about 30 homeowners to evacuate. Keener Township Volunteer Fire Chief Randy Woods said the breach was relatively minor when it was discovered about 3 p.m. Friday near Demotte, about 50 miles southeast of Chicago. He said some local residents tried to sandbag the breach "to get it under control, but it just got bigger and bigger."

Local firefighters were called out to help them, but eventually everyone had to pull out for their own safety. No injuries were reported.

The National Weather Service said record flooding was occurring along the Kankakee following several days of heavy rains and snowmelt that have sent streams out of their banks from the Ohio River to Michigan and Wisconsin.

One resident, Jim Gosa, was without power and had four feet of water in his basement.

Some homes on Friday were halfway under water.

Strong thunderstorms moving into Oklahoma and Arkansas on Saturday brought a chance for flooding and possibly tornadoes. The weather service says nearly 10 inches of rain has fallen in parts of Arkansas over the past four days and up to 3 inches more was possible.