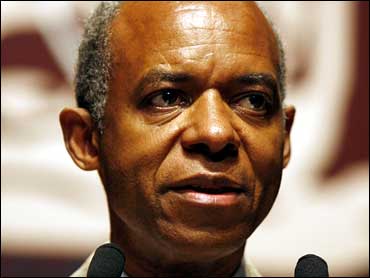 Voters in Louisiana ousted indicted Democratic Rep. William Jefferson on Saturday, instead electing a Republican attorney who will be the first Vietnamese-American in Congress.

Unofficial results showed Anh "Joseph" Cao denying Jefferson a 10th term. Republicans made an aggressive push to take the seat from the 61-year-old incumbent, who has pleaded not guilty to charges of bribery, laundering money and misusing his congressional office.

Cao, 41, won a predominantly black and heavily Democratic district that covers most of New Orleans.

A barrage of election-day automated telephone calls on Cao's behalf flooded the district, including a pitch from the national Republican Party.

New Orleans voters had long been loyal to Jefferson, re-electing him in 2006 even after news of the bribery scandal broke. Late-night TV comics made him the butt of jokes after federal agents said they found $90,000 in alleged bribe money hidden in his freezer.

"People are innocent until proven guilty," said Faye Leggins, 54, an educator and Democrat who moved back to the city six months ago and still has fresh memories of Hurricane Katrina. She voted for Jefferson on Saturday. "He has enough seniority, so he can do a lot to redevelop this city."

"The Vietnamese aren't much into politics," he said.

Turnout appeared light in the district, where two-thirds of voters are Democrats and 11 percent are Republicans. More than 60 percent are black.

4652628Though he was the underdog, Cao (left, his daughter Betsy Cao, 4, and his wife Kate Hieu Hoang) received endorsements from some Democrat and green-conscious groups as well as the area's Vietnamese-American community.

Cao came to the United States as a child after the fall of Saigon in 1975 and went on to earn degrees in philosophy, physics and law.

The election was one of two in Louisiana postponed because of Hurricane Gustav.

The national Republican Party also backed Cao, an immigration lawyer, with a barrage of advertising portraying Jefferson as corrupt.

Prosecutors contend Jefferson used his influence as chairman of the congressional Africa Investment and Trade Caucus to broker deals in Nigeria, Ghana, Cameroon and other African nations on behalf of those who bribed him.

No trial date has been set for Jefferson, who became Louisiana's first black congressman since Reconstruction when he took office in 1991.